What Do You Own When You Invest in Chinese Stocks? - GHPIA

As the Chinese economy has ballooned over the past two decades, so too, has the interest among foreign investors in profiting from that growth by investing in Chinese companies. Chinese stocks are heavily weighted in emerging markets and global equities indices such as the benchmark MSCI Emerging Markets index, whose Chinese holdings currently comprise about 30% of the index.

For everyday American investors, trillions of dollars have flowed into one-size-fits-all investment strategies such as target date funds in 401(k) plans. It is common for equity allocations of these funds to have 3-5% exposed to Chinese companies.

Nonetheless, many U.S. investors may be surprised to find out that, despite having spent so much of their nest egg on what was presumed to be stock, they do not actually own anything in China. Their equity holdings walk and talk like a stock, but they are not stocks as we understand them in a country like the United States with a well-regulated securities market and strong legal protection for private property.

What foreign investors are actually purchasing when they invest in a Chinese company are often shares in what is called a Variable Interest Entity (VIE). While the term “Variable Interest Entity” was coined by the Federal Accounting Standards Board (FASB) in 2003, similar processes had already been used by Chinese companies to access foreign investment since the 1990s. To understand the process and why it has become the primary vehicle for Chinese companies to list on foreign stock exchanges requires knowledge of a few key concepts about Chinese property rights and Western accounting standards.

Chinese law prohibits foreign property ownership in most industries. For Chinese companies to raise foreign capital, they must create offshore entities. These are the VIEs, which get around the foreign-ownership laws by remaining under the control of Chinese nationals. These shell companies — often held in the Cayman Islands and named similarly to the associated Chinese company — hold legal agreements which give them claim to the profits of the associated company.

VIEs are not new, but Chinese companies have made them popular as a way to make foreign investment acceptable to both Chinese and foreign regulators. Although this structure circumvents China’s tax, foreign currency exchange, and foreign-ownership laws, Chinese regulators have mostly turned a blind eye for decades. This lack of enforcement is uncharacteristic of the Chinese government, but it is a small price to pay for the increased access to public capital their businesses and economy have enjoyed due to the arrangement.

Turning a blind eye should not be confused with authorizing or agreeing to enforce the legal agreements used to create VIEs or the private property rights those agreements ostensibly protect. Though foreign investors, broadly speaking, have also benefited by taking this grace for granted, the price they pay in terms of risk is much higher.

When agreements are violated, shareholders of VIEs are left stranded and cannot expect enforcement from the Chinese government. One of the most publicized examples of this was the 2011 dispute over Alipay. Alipay was a subsidiary of Chinese behemoth Alibaba, 43% of which was “owned” by American company Yahoo. Alibaba founder (and legal owner under Chinese law) Jack Ma transferred the Alipay business to a separate company he controlled. “Shareholders” Yahoo and Softbank balked, and share price dropped. The parties reached a settlement that would send some Alipay revenue to Alibaba and would net Alibaba between $2 billion and $6 billion if Alipay ever went public. It never did, even after the Ant Group acquired Alipay; the Chinese government prevented Ant Group from going public in 2020. It is not clear how or whether the current owners of Yahoo’s divided businesses would collect if an IPO succeeded.

Investors in U.S. companies enjoy the benefit of a highly regulated and scrutinized investment industry. Public companies must comply with Securities and Exchange Commission (SEC) accounting and reporting standards and submit to audits. The U.S. legal system holds public companies accountable for contract violations. When reliable audits of offshore companies and enforcement of contract law beyond U.S. jurisdiction are not an option, foreign companies may still list on American exchanges if they meet the standards of disclosing risks on financial statements that U.S. regulators and exchanges have set.

Even so, investors sometimes ignore disclosed risks, the way smokers ignore a Surgeon General’s warning on a pack of cigarettes. An example of such a warning appears in SEC filings by Luckin Coffee (often referred to in the West as the “Chinese Starbucks”):

“It is unclear whether our current corporate structure will be considered ‘Chinese’ under the scheme of the Draft Foreign Investment Law (2015). In the event that our contractual arrangements with our VIE and shareholders of our VIE are not treated as a domestic investment and/or the foreign restricted licenses and permits held by the VIE are classified as a ‘prohibited business’ in the Prohibited List or a ‘restricted business’ in the Restricted List under the Draft Foreign Investment Law (2015) when officially enacted, such contractual arrangements may be deemed as invalid and illegal and we may be required to unwind the contractual arrangements and/or dispose of such business.”

There have been further instances of investors burned by VIEs’ poor reporting and lack of transparency. In recent months, Chinese legislation that severely curtailed the operations of Didi (China’s Uber) and TAL Education caused those stocks to plummet in value, leading in Didi’s case to its delisting from the New York Stock Exchange in December. December also saw the SEC complete the process necessary to delist other Chinese stocks through the Holding Foreign Companies Accountable Act.

Beyond the operating risk of the VIE structure, there are many other ways to get burned by investing in Chinese companies. The Chinese government’s 2020 crackdown in Hong Kong made some foreign investors realize that China is more intent on maintaining control and order than in facilitating and protecting the flow of foreign capital, for which Hong Kong had been the traditional conduit. There is some indication that foreign investors are starting to become cognizant of these high risks and price them into their valuations of Chinese companies. Shares available to foreign investors in Tencent, Alibaba, JD.com and NIO all fell 40% or more off their highs in 2021. While Chinese companies still comprise 30% of the MSCI Emerging Markets index, that portion is down from its high of 35% last February. And MSCI’s China Exchange-Traded Fund has lost about 40% of its market value since its February 2021 peak (see chart below). 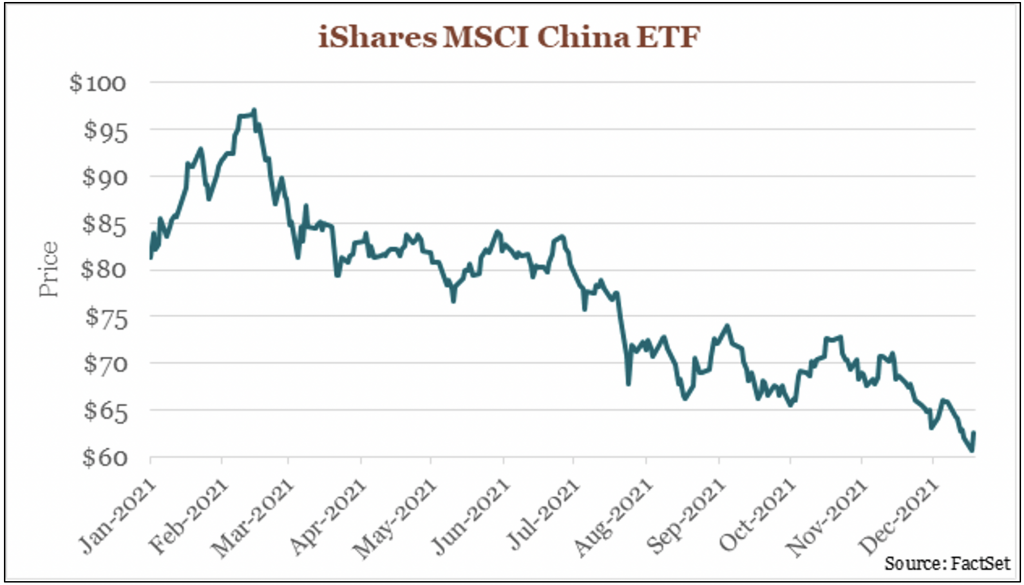 As equity investors and analysts, GHPIA selects stocks by finding companies with good business models and using a mathematical approach to value those investments based on their fundamentals and intrinsic risks. Company profits become “returns” for investors only if they have a reasonable expectation of collecting their share. As stewards of our clients’ investments, we should be supremely confident that the definition “shareholder” carries its assumed meaning.

Despite many great and profitable companies that exist in China, accurately discounting the price of a stock for the risks related to the VIE structure is nearly impossible. Given the lack of transparency and reliability of financial reporting for VIEs, any accurate fair value calculation would price these companies at near zero. As long as these risks and conditions exist, GHPIA will continue to limit our exposure to companies in China and keep our focus on the many great opportunities elsewhere.