As China Pressures Hong Kong, How Should Investors React? - GHPIA

In late May, China’s parliament passed national security legislation that critics fear will undermine Hong Kong’s freedom and prosperity. The new law, which awaits implementation, will make criminal in Hong Kong acts of secession, subversion, and terrorism against the Chinese government. The national security resolution is widely interpreted as China’s effort to take full control over a currently semi‐autonomous Hong Kong in response to last year’s pro‐democracy protests.

Given Hong Kong’s status as a global financial center founded on a strong rule of law and free market economy, this recent measure by China has drawn a sharp rebuke from leaders of Western democracies. While the scope and enforcement tactics for the national security law remain unclear, undoubtedly China is flexing its muscle, menacing Hong Kong and stirring up geopolitical tension, with broad implications for the financial markets.

As with most market‐moving events, it is important to consider the deeper historical context to better understand the present impact of China’s new security law. China initially ceded Hong Kong to Britain after the First Opium War in 1841. During the following 50 years, the new British colony thrived as a gateway for international trade and commerce with China, and more broadly, all of Asia. In an 1898 treaty, Britain gained the authority to govern Hong Kong via a 98‐year lease. When the lease expired in 1997, Britain returned Hong Kong to China. In exchange, China enacted the “Basic Law of Hong Kong,” promising to maintain Hong Kong’s capitalist system and legal institutions for another 50 years until 2047.

Hong Kong and China refer to this arrangement as “One Country, Two Systems.” For the most part, both sides respected this unique arrangement while both Hong Kong and China enjoyed economic prosperity. However, as demonstrated by last year’s massive Hong Kong protests over proposed Chinese extradition laws, many Hong Kong citizens are fiercely protective of their freedoms and autonomy whenever China threatens to exert more control.

“One Country, Two Systems” in Contrast

As we have stated frequently in previous letters and videos, we believe the most important consideration for international investors is a country’s rule of law. There is a high correlation between a country’s rule of law and the individual wealth of its citizens, as well as the robustness of its capital markets and the legal protections afforded to investors.

In these regards, China and Hong Kong could not be much further apart. As GHPIA does with our proprietary scoring methods, the World Justice Project (WJP) creates a comprehensive annual rule of law index measuring governance in 120 countries and regions based on such categories as fundamental rights, criminal justice, regulatory enforcement, and constraints on government powers. Hong Kong, considered one of the freest regions in the world, perennially ranks in the top quartile of the WJP Index, while China typically scores in the bottom quartile. No wonder Hong Kong’s GDP per capita is roughly fivefold that of China (see Chart 1). 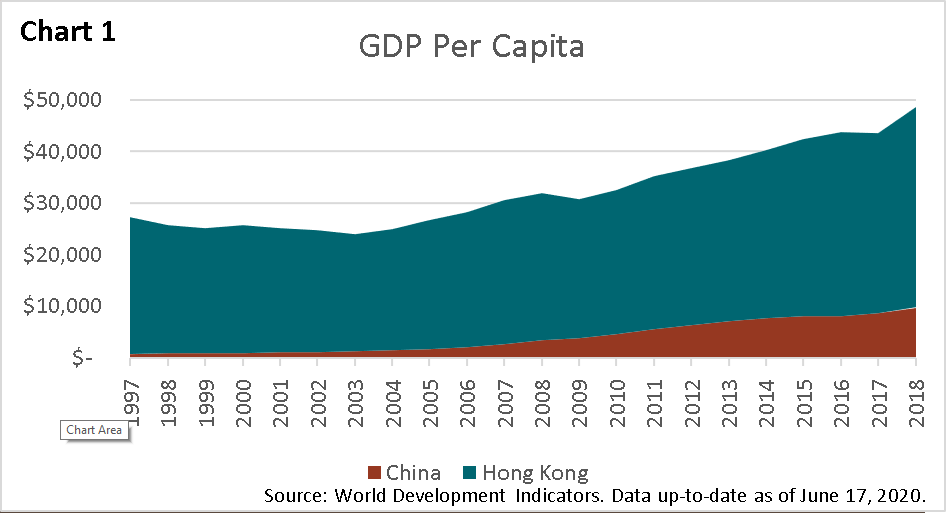 China may be a wealthy nation overall, but its very weak rule of law impoverishes the average individual citizen.

The contrasts between these two systems extend well beyond rule of law and GDP per capita, as detailed in the following table:

Relative to China’s gigantic population and total GDP, Hong Kong sits at roughly 0.5% and 2.7% respectively. However, as a result of Hong Kong’s more desirable regulatory, tax, and legal framework, Hong Kong’s stock market punches well above its weight class, registering as the fourth largest marketplace in the world (see Chart 2). 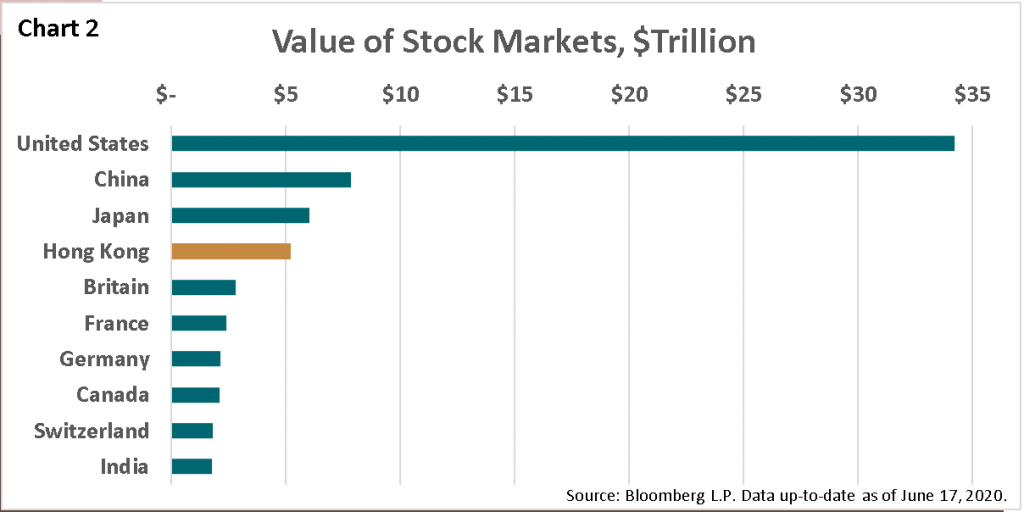 In 2015, China abruptly devalued its currency (the yuan) to bolster exports and boost economic growth. As the yuan weakened, investors and businesses within mainland China prompted one of the largest waves of capital flight in modern history, estimated around $1 trillion in 2015 alone. In order to plug the massive decrease in China’s foreign‐exchange reserves, the Chinese authorities extended increasingly stringent capital controls within the mainland. Meanwhile, neighboring Hong Kong, with its far more flexible and trustworthy legal system, has been a gateway for Chinese locals and businesses to invest capital outside of the mainland. Likewise, Hong Kong has served as a dependable bridge for foreign investments into mainland China.

Regardless of how intriguing an investment in mainland China may seem, it is all moot if capital controls prevent the timely return of one’s investment. Correspondingly, no matter how much money Chinese citizens and businesses earn, many find it imperative, given their distrust of the state, to shift a good measure of this wealth outside of China.

Since Hong Kong imposes no such capital controls, it has served as a conduit for trillions of dollars in trade, investment, debt issuance, and equity IPOs into and out of mainland China. For example, roughly half (about $35 billion) of mainland Chinese IPO funds were raised in Hong Kong last year. Undoubtedly, Hong Kong is financially critical to China’s success, and yet, China seems determined to close the loophole Hong Kong has provided for those seeking to circumvent mainland capital controls.

How Will the New Security Law Affect Hong Kong’s Status as a Global Financial Center?

It seems China’s President Xi is intent on flouting Hong Kong’s Basic Law well before the agreed upon transition period in 2047. Clearly, China was embarrassed by the millions of Hong Kong residents flooding the streets in pro‐democracy protests last summer and is seeking to suppress further protests via the implementation of its potentially far‐reaching new security law. Yet China also seeks global financial preeminence and the internationalization of its yuan. It’s not clear how China can accomplish this if it threatens the freedoms that enable Hong Kong to serve as China’s financial bridge to the world.

In a sign of submission to China’s growing economic clout, a few banks with a major presence in Hong Kong (HSBC and Standard Charter) have already thrown support behind Xi’s newly proposed security law. To counter China’s continued pressure, Western democracies have responded with actions like the U.K. offering visas to nearly 3 million Hong Kong citizens (40% of Hong Kong’s population) and the U.S. threatening to revoke Hong Kong’s special trade status. Beyond the international outrage, Xi’s gambit will likewise face challenges from Hong Kong citizens unwilling to easily give up their social and political freedoms for China’s promise of economic stability.

Ultimately, however, Hong Kong’s years of autonomy from China appear to be numbered. That development is likely to weaken Hong Kong’s influence as a global financial center. Investors and businesses who prize the rule of law, for reasons of both global politics and financial self‐interest, should be wary.