Since social distancing policies went into effect in the United States in mid-March, our team at GHP Investment Advisors, Inc. started estimating the daily average economic impact. Please read our quarterly newsletter for our domestic analysis. In this letter, we use similar techniques to assess the global impact based on the information available to us at present.

The International Monetary Fund (IMF) estimates world gross domestic product (GDP) was $90.5 trillion in 2019. Economic growth adjusted for inflation averaged 3.5% per year over the past 60 years, expanding more than sevenfold over this time frame. During this 60-year period, there were many country-specific economic recessions, but aggregate world GDP declined just five times (see Table 1 below). The two biggest declines in world GDP occurred quite recently, in 2008-2009 and 2014-2015. 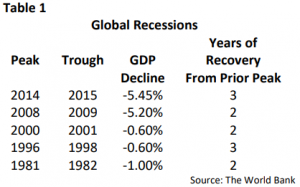 In 2008–2009, the Global Financial Crisis pushed almost every country in the world into a significant recession, including, of course, the United States. The 2014-2015 drop might surprise many Americans, since our country did not experience a recession in synchronization with the rest of the world. For a deeper retrospective, please read the letters we wrote during this period in our Market Perspectives section, including “Developing Country Chaos Climaxing” from 2016:Q3, and “The Almighty Dollar…and Yuan?” from 2015:Q3.

During the first 36 years following World War II, individual countries experienced recessions either in isolation or sometimes in concert with a few other closely connected economies. Total global GDP, however, did not decline. Intensified international economic integration over the past 40 years boosted American and global prosperity but also fostered more synchronized booms and busts. Until this coronavirus pandemic, national business cycles were only partially harmonized into a global business cycle. This time around, very few countries will escape a significant drop in GDP, and most will experience historically large declines in the coming months.

Estimating the economic impact of business closures and social distancing restrictions is mostly a guessing game. Epidemiologists offer widely disparate forecasts of infection trajectories, hospitalization requirements, and fatality rates. Economists must now factor these variables into short-term expectations of economic growth. Among less economically developed countries, social distancing may prove impossible – even if formally mandated by their governments – due to overcrowding, inferior infrastructure, and the limited financial capacities of their governments. For example, the population of metropolitan Mumbai, India is approximately 25 million, with more than 40% living in dense slums lacking indoor plumbing.

This recession will affect the global economy in several important ways. We at GHPIA estimate that business closures and stay-at-home directives are reducing daily GDP by 25% to 30% in advanced economies such as the United States, Germany, France, and the United Kingdom. Since these wealthy, industrialized nations produce $53 trillion in annual collective GDP, this could amount to a daily economic hit around $45 billion. This group does not include China, which accounts for $15 trillion of GDP all by itself.

China was the first country to experience coronavirus. Impact assessments are difficult to discern from opaque Chinese health and economic data, but many economists estimate a 5% to 8% drop in Chinese GDP during the 10 weeks of Hubei Province lockdown and national business closures. Although China is gradually loosening social distancing restrictions as reported coronavirus cases diminish, it is an open question whether the Chinese fully contained their outbreak or will require another quarantine period in the future.

Less Developed Countries May Get Pummeled

The remainder of the planet consists of countries at various stages of economic development. Many sell commodities or manufactured products to the wealthy countries. These exports will suffer greatly. Particularly hard hit will be countries that export industrial commodities such as oil, natural gas, or metals. Demand and prices for these products has dropped precipitously.

Many commodity-exporting nations, if not most, rely on revenues from commodity sales to fund their governments. For example, prior to the recent oil price collapse, the Russian government received 40% of its revenue from oil and Saudi Arabia almost 90%. Although the Mexican government significantly reduced its dependence on oil revenues in recent years, oil sales still account for 16% of its budget.

Falling government revenues and limited borrowing capacity will constrain poor countries’ ability to combat the pandemic or support the financial requirements of their people. Despite some assistance from multilateral organizations such as the IMF or World Bank, we could witness mounting hardships and political unrest in the coming months and years in much of the developing world.

We at GHPIA estimate collective GDP in the emerging world is running about $18 billion per day lower than it was prior to the coronavirus pandemic. Using these very rough daily estimates, we can guess how large the global impact will be depending upon pandemic trajectory. If closures remain in place – primarily in the advanced economies – for 60 days, the global dip in GDP will approach 4%. If restrictions remain in place for 90 days, or perhaps up to 180 days, then the declines will fall in the range of 6% to 12%.

Our planetary economy last suffered a synchronized recession of this potential magnitude during the Great Depression. Even if the peak-to-trough decline in global GDP is ultimately on par with the 1930s, however, we are unlikely to experience another Great Depression. The advanced economies learned much from the Great Depression and are already using every resource to prevent the devastating financial system collapse that inhibited recovery until World War II. As such, the GDP drop could be dramatic in a worst-case scenario but recoverable in a much shorter period than during the Great Depression. (For a more complete background discussion comparing the COVID-19 crisis to the Great Depression, please see our recent GHPIA webinar, particularly the presentation by Mike Sullivan.)

Right now, we are at the mercy of coronavirus and our reaction to this virus. Governments in advanced economies indicate the current quarantine period should ease as their medical systems catch up to handle the expected influx of patients in the coming weeks. Then, more targeted mitigation strategies aimed at the most vulnerable portions of the population might allow less vulnerable segments of the population to return to work. A targeted mitigation approach in combination with improved health care tools and resources would slow the global economic bleeding. If this baseline scenario proves more correct than some of the more dire predictions, the world recession could prove similar in size to the two experienced in 2008-2009 and 2014-2015.

Most epidemiologists seem to believe that the most dangerous phase of this global coronavirus pandemic will play itself out over the next 12 to 24 months. This time period covers various scenarios, including sustained “flattening the curve” with social distancing policies, reinfection in multiple waves, and unsuccessful mitigation with high infection rates in much of the world. Most governments in the advanced economies retain the financial capacity and commitment to support unemployed workers, idled business, and financial institution balance sheets for this length of time if necessary. By intervening aggressively, governments may be able to limit the global economy’s recovery time to just a few years, as in past crises (see Table 1). Of course, they will incur significant national debt to do so (the long-term implications of which are beyond the scope of this letter). We hope this unprecedented accrual of debt will not be necessary, but because of such intervention, the global economy will live to fight another day.

The GHP Investment Advisors Quarterly Global Markets Newsletter is published as a service to our clients and other interested parties. This material is not intended to be relied upon as a forecast, research, investment, accounting, legal or tax advice and is not a recommendation offer or solicitation to buy or sell any securities or to adopt any investment strategy. The views and strategies described may not be suitable for all investors. References to specific securities, asset classes and financial markets are for illustrative purposes only. Past performance is no guarantee of future results.