In 2015 world Gross Domestic Product (GDP – the estimated value of all goods and services produced during the year) was $74.7 trillion. For a frame of reference, U.S. GDP was $18 trillion or 24% of the global economy. The International Monetary Fund (IMF) divides the world into two broad groups: Advanced Economies vs. Developing Economies. Advanced Economies are wealthy countries with diversified exports and significant linkages with the global financial system. Advanced economies comprise approximately 60% of world GDP, but only 25% of world population (the U.S. Census Bureau estimates the world population is 7.3 billion).

Although Developing Economies are 40% of world GDP, they contributed 80% of global economic growth between 2009 and 2013 as we emerged from the financial crisis. China’s $11.3 trillion economy led the way followed by countries that export natural resources. The natural resource boom was fueled by China’s blistering growth, but also by inflated commodity prices. American Quantitative Easing (QE) monetary policies from 2008 through 2013 kept the dollar weak, contributing to the commodity bubble. Since commodities such as oil, copper or soybeans are priced in dollars on global markets, a weaker dollar tends to inflate commodity prices, and a stronger dollar will push prices lower. Chinese exports also benefited, since China’s currency was linked to the U.S. dollar (see this quarter’s GHPIA Investment Insight newsletter at www.ghpia.com/resources).

Among the large Developing Economies, China, Brazil and Russia were impacted the most. Chinese economic growth decelerated from 12.2% in early 2012 to 6.7% last quarter. Brazil and Russia fell into deep recessions (see Chart 1). The Brazilian economy grew by 9.2% in the first quarter of 2010, but the third quarter of 2016 was likely its 10th straight quarter of economic contraction. Similarly, the Russian economy shrank for the past seven quarters. More broadly, Developing Economies averaged roughly 7.5% growth in 2010 vs. 2.0% in the second quarter of 2016. 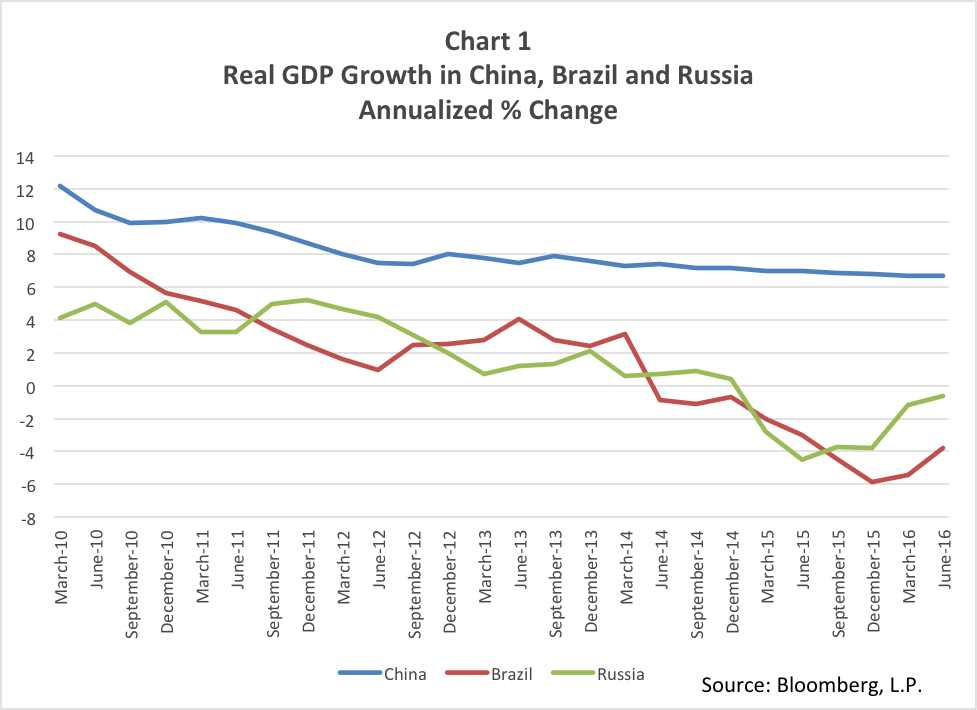 Even though Chinese economic growth will likely decelerate further (see our 2015:Q3 Global Markets letter “How Overbuilt is China” available on our website www.ghpia.com and the U.S. Federal Reserve seems inclined to raise interest rates, the worst is probably now over for most Developing Economies. As we note in this quarter’s GHPIA newsletter, the U.S. dollar appreciated 75% against the Brazilian real, 107% against to the Russian ruble, 55% against the South African rand, and 44% against the Mexican peso from October 2014, when QE ended, through the U.S. interest rate hike in December 2015. This severe reaction moderated in 2016 as commodity prices stabilized.

Chart 2 ranks the largest 15 developing countries by GDP. While slower than several years ago, growth remains healthy in the majority. When the U.S. sneezes the rest of the world often catches a cold. Developing countries that export natural resources caught pneumonia. As the commodity cycle bottoms, so too will commodity intensive economies such as Brazil and Russia. 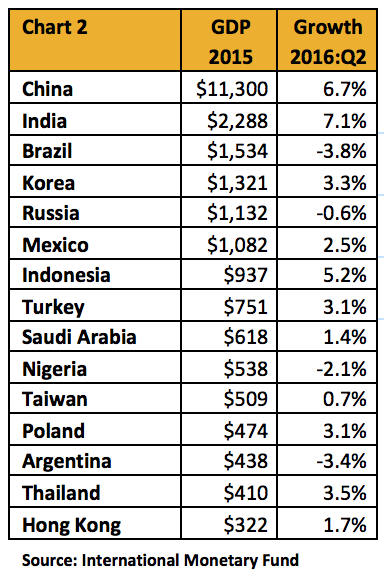 Developing countries are now a critical portion of the world economy, and their influence is likely to increase further in the coming years. We analyze emerging countries to understand the opportunities and risks for client portfolios, but also to understand their influence on global and American financial markets. We agree with a quote from political philosopher Seymour Martin Lipset who says that one “who knows only one country knows no countries.”