For all the debate over climate change and green energy policy, there is no disputing that reducing carbon emissions has become a global agenda – and a global industry. Countries, companies, and individuals are striving to meet the 2015 Paris Climate Accord’s goals of cutting global emissions in half by 2030 and achieving net-zero by 2050. President Biden has even brought the United States back on board, after the nation sat out the Accord during the Trump years.

Market participants have never been more interested in environmentally friendly investing, with ESG (environmental/social/governance) fund inflows hitting record highs in 2020. This activity includes not just “sustainable” equity and fixed income investments but carbon market trading as well. Banks and energy producers are expanding their environmental commodities divisions, futures for voluntary emissions offsets are now traded on the Chicago Mercantile Exchange, and even retail investors can get in on the action with a recently launched ETF dedicated to tracking the price of carbon-related financial instruments.

Nonetheless, we remain skeptical about carbon trading, both as an effective way to reduce pollution and as a long-term investment choice, judging by the problematic history of the carbon markets.

The emissions markets were initially proposed under the Kyoto Protocol in 1992 and started operating in 2005. Under a cap-and-trade system, emissions-heavy companies such as energy producers agree to a hard cap on how much CO2 they can emit per year, in the form of issued credits called carbon allowances. If a company comes in under its emission cap, it can sell those extra credits to a company that may not have done so. In addition to allowances, Certified Emission Reductions (CER) introduced under the Clean Development Mechanism (CDM), allowed trading of emission offsets between countries. Emission offsets allow a polluter to fund a carbon-reducing project, which in theory would offset the polluter’s emissions.

The launch of these programs saw the price of carbon boom, peaking at $30 per ton in 2008 as the European Union Emission Trading Scheme (EU ETS) became the largest carbon market in the world. Because the EU ETS allowed the use of CERs to reduce a company’s carbon generation, companies quickly realized it was cheaper to meet their emission targets by buying offsets than the hard capped allowances. This led to a boom in the supply of green development projects in developing countries looking to capitalize on the demand for offsets. 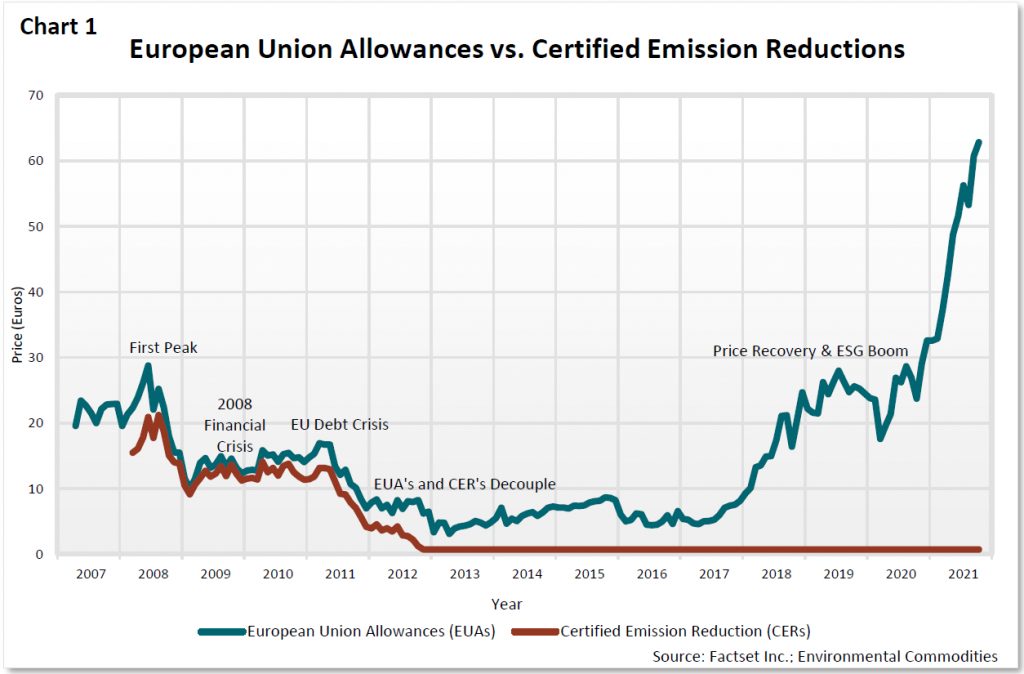 The 2008 Financial Crisis and the 2010 European Debt Crisis both hurt the demand for carbon credits, yet countries continued to develop reduction projects and issue offsets, driving down the price of carbon even further. In addition to the oversupply of credits, there was a lot of uncertainty about the actual effectiveness of offset projects. New CDM projects decreased dramatically after 2012 as participating countries set caps on offsets from other countries and the carbon markets became more and more fragmented. Between 2012 and 2015, the carbon markets were stagnant, with policymakers attempting to come up with solutions to the failures of the markets established under the Kyoto Protocol and Clean Development Mechanism.

Despite the decline in carbon prices post 2008, the cap-and-trade model gained traction throughout the years. California launched a program and linked with Quebec in 2014, Korea launched one in 2015 and China announced its framework in the fourth quarter of 2020. In 2016, the International Civil Aviation Organization launched CORSIA, a carbon offset and reduction scheme for global air travel. 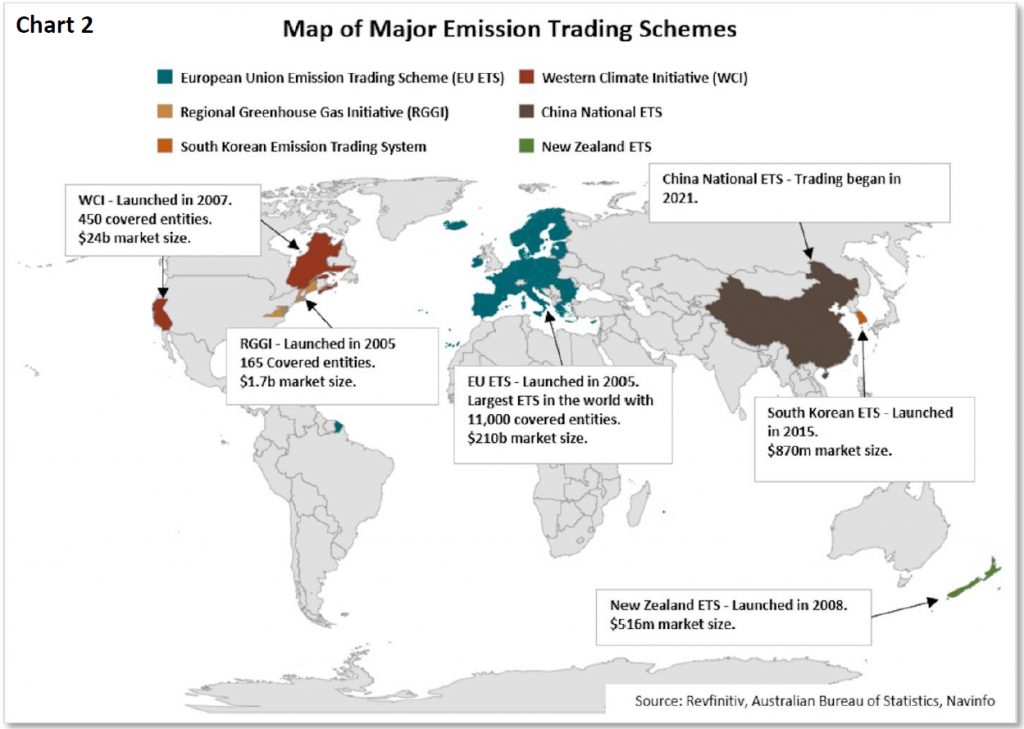 Since 2015, the regional carbon markets have seen a recovery in prices. The EU ETS was successful in implementing its Market Stability Reserve in 2019 to soak up the excess carbon credits left over from the Financial and Eurozone crises, the northeastern United States Regional Greenhouse Gas Initiative RGGI also implemented a similar program in 2014.

2020 was an especially good year for the price of carbon, as China, Japan, South Korea, Canada, South Africa, and several smaller countries made public commitments to reducing emissions. The total value of the global carbon markets hit $200 billion, up 20% from 2019 as prices hit all-time highs. The EU ETS grew by 20%, the RGGI and Western Climate Initiative by 16%.

The supply of allowances is set to decrease quickly over the coming years while global economic growth continues. This interesting supply-demand scenario has companies and investors flocking into the carbon markets. The number of participants trading in the European and North American carbon markets has increased 85% since 2017.

Unlike allowances, CERs have not moved since bottoming out in 2013, due the restrictions put in place by emissions trading schemes around the world. Policymakers have worked on reviving the market with the establishment of various governing bodies, but these efforts have seen little success. Even the emergence of the voluntary carbon market, where companies elect to reduce their footprint by choice, has done little to help.

Investor interest in sustainable investing has never been higher. 2020 saw the largest inflows into impact funds to date with total assets under management reaching 51.1 billion. Flows coming into ESG funds accounted for 24% of overall flows into U.S. stock and bond funds for the year. 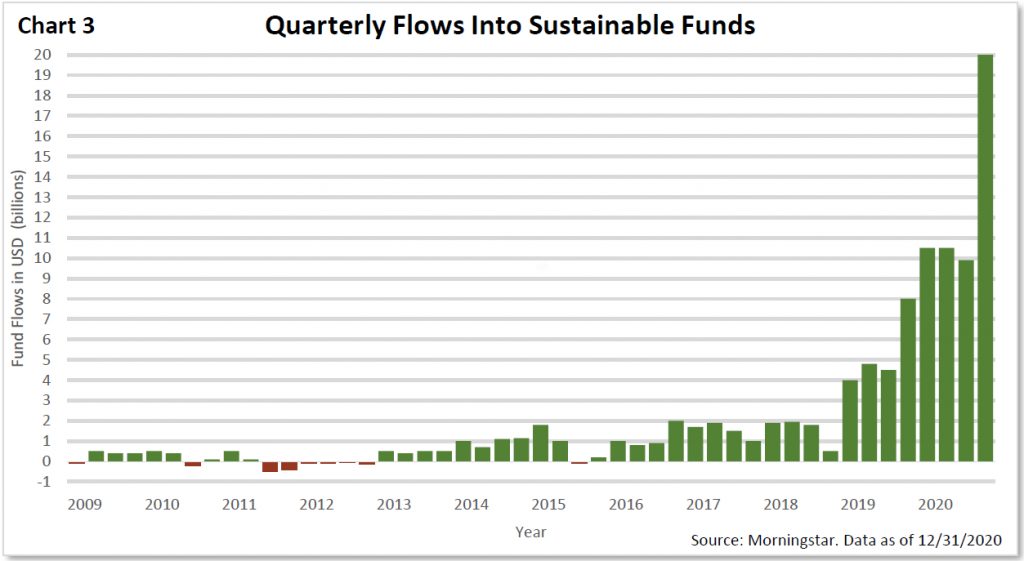 The massive interest in green investing and the recovery in the carbon markets has also led to the development of a few retail products that track carbon credits. KraneShares Global Carbon ETF (KRBN) tracks the prices of European Union Allowances, California Carbon Allowances, and the Regional Greenhouse Gas Initiative. Since its launch in 2020, it has gone from $3m in assets under management at launch to $888m without a single day of net outflows. With the ESG Equity and Fixed income spaces becoming increasingly oversaturated, additional carbon-based funds for retail investors are likely to follow.

For more insights on investing in international sustainable energy markets, read our recent newsletter about the rechargeable lithium battery industry.

Despite the stellar performance of KRBN, investing in carbon allowances is far from a sure thing. As we saw in the early days of the carbon markets, effective governance is crucial to avoid the oversupply of carbon credits. And while regulations have strengthened, they may be undermined by the possible establishment of a global carbon market that would likely repeat the mistakes of Clean Development Mechanism.

Article 6 of the Paris Climate Agreement aims to establish a globally integrated carbon market that would allow companies in participating countries to trade Internationally Transferred Mitigation Outcomes (ITMO’s) to meet their emissions goals. These proposed ITMO’s would be similar in nature to the CER’s that blew up the carbon market in the first place. While this proposal is highly contentious and doesn’t seem likely to pass soon, it could pose a major threat to the price of carbon.

There are other significant risks to investors. Companies may achieve emission targets without the use of carbon credits by investing in technologies and changing processes which would render allowances useless. Countries may pull out of agreements if caps become too damaging to industry. And there is cyclical risk. For instance, when the economy slows down during a recession, fuel consumption diminishes and emissions drop, reducing the need for allowances.

Don’t Get Caught Up in the Hype

There is no doubt that carbon markets are booming now, and that boom may continue over the short term with countries around the globe pledging to cut emissions in half over the next 10 years. Expect to see more carbon-focused investment products available to retail investors in the near future.

Still, remember that investing in carbon allowances is investing in a number set by a governing body. Allowances don’t generate revenue, turn a profit, or pay a dividend. And while the carbon market outlook may appear rosy now, it looked pretty good in 2008 too.

It is entirely possible that business and technology will reduce emissions on their own regardless of government action or inaction. There is no mandate in the U.S. for electric cars, and yet sales are burgeoning. Natural gas is replacing coal, and electric utility emissions are falling, even without government carrots and sticks. And while all this may be good for the planet, it will not help investors placing long bets on the carbon markets.