The Road to the Future Is Paved with Lithium - GHPIA 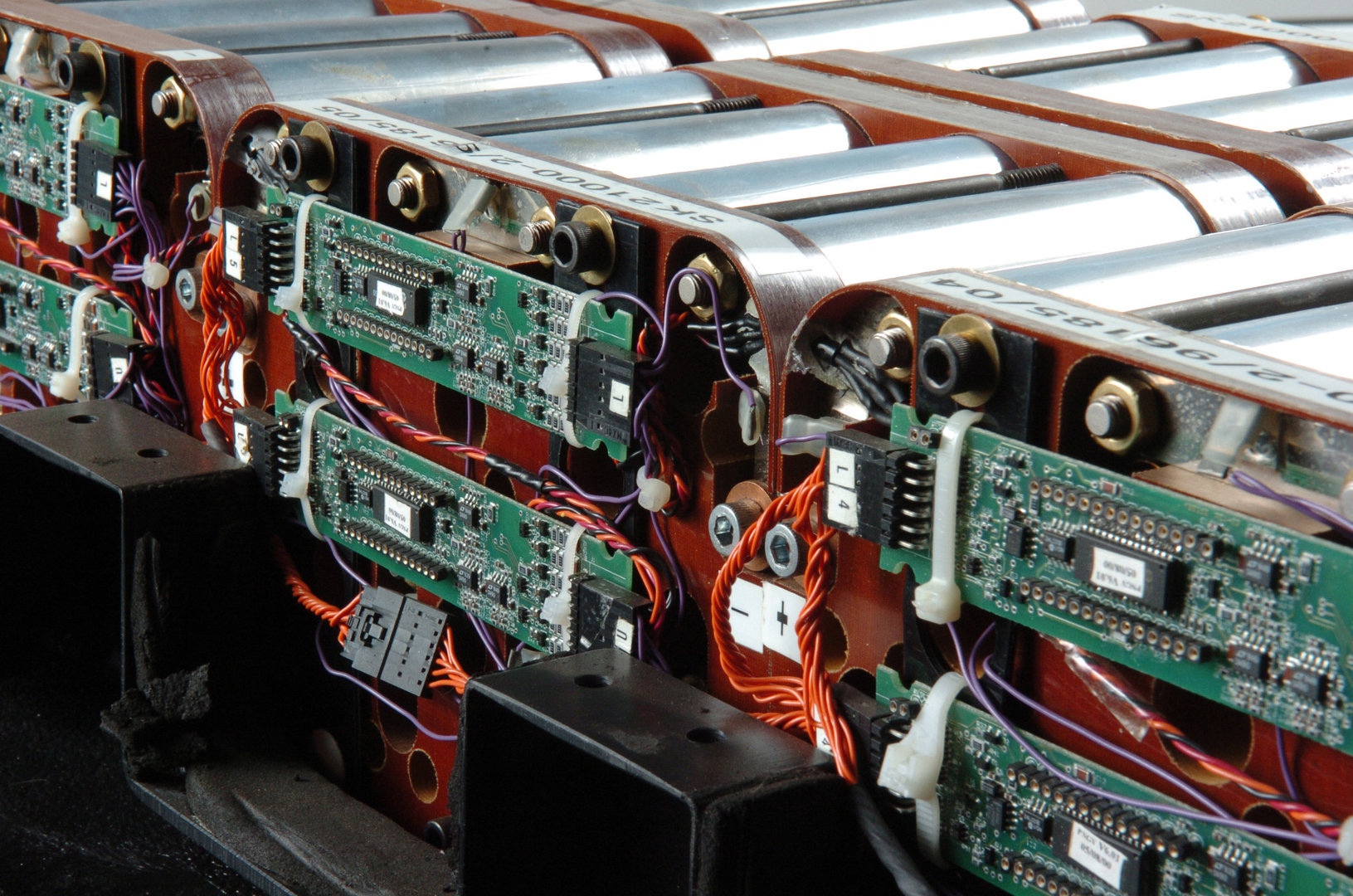 If the story of energy in the 20th century was about petroleum, then the next chapter in the 21st century may be about lithium. Specifically, the lithium-ion battery, which is powering the ongoing rechargeable battery revolution. As the developed world begins the long transition from fossil fuel dependency to new sources of renewable power, the lithium extraction industry will take on increasing importance and influence, a situation that brings considerable opportunities and risks for international investors.

Lithium’s low weight and novel ability to store energy in a relatively efficient fashion have made it the favored choice for rechargeable battery technologies. As such, this simple element has become incredibly important to the world economy in a short amount of time. Demand for lithium has grown at about 9% per annum for the last five years, and this rate is only expected to increase as electric vehicle (EV) adoption grows into the next decade.

Beyond EVs, the applications for lithium-ion batteries are becoming endless. The telecom industry is forever changed, with the advent of powerful, rechargeable mobile and wearable devices. Battery-powered sensors are now powering the next wave of the internet’s evolution, known as the Internet of Things. Utility grids and power generators, now dependent on larger sources of renewable, low-carbon energy, will come to rely on battery-powered on-demand generation. No wonder demand for lithium-ion batteries in various technologies is expected to skyrocket over the next decade.

There are many natural sources of lithium, but only two are currently considered commercially viable for extraction: hard rock deposits and brine from salt lakes or salt flats. These two mining sources comprise more than 95% of the world’s lithium supply. With the hard rock deposits, held in granitic pegmatite rock, the lithium is processed from the resulting ores, much like traditional metals mining production. With brine production, the metal-rich liquids are pumped from ancient salt lake beds (salars) and dried via evaporation. Some of the richest deposits are those found in South America, at the intersection of Chile, Bolivia, and Argentina, in an area now known as the Lithium Triangle. The evaporation processes can take up to two years to complete.

Currently, the leading lithium material producing nation is Australia, followed by Chile. Each uses drasti-cally different methods too, with Chile mining almost exclusively from salars and Australia from granite. China is close behind, not only as a lithium mining producer, but also as one of the leading processors of Lithium Carbonate Equivalent (LCE) and as the world leader in lithium-ion battery production. Argentina has also become a significant producer, accessing the brine in its share of the Lithium Triangle.

In terms of battery production capacity, the top country, ranked by energy output, is China, as the chart below illustrates. China’s dominance in LCE processing and lithium-ion battery production results from strong growth in domestic EV demand and early strategic investments in the value chain. As a result, BloombergNEF (New Energy Finance) expects China to remain the top-ranked country in the global lithium-ion battery supply chain through 2025. Japan and South Korea rank second and third. Europe, which is the world’s fastest-growing EV market, also ranks high, due to large, innovative investments in the battery supply chain. 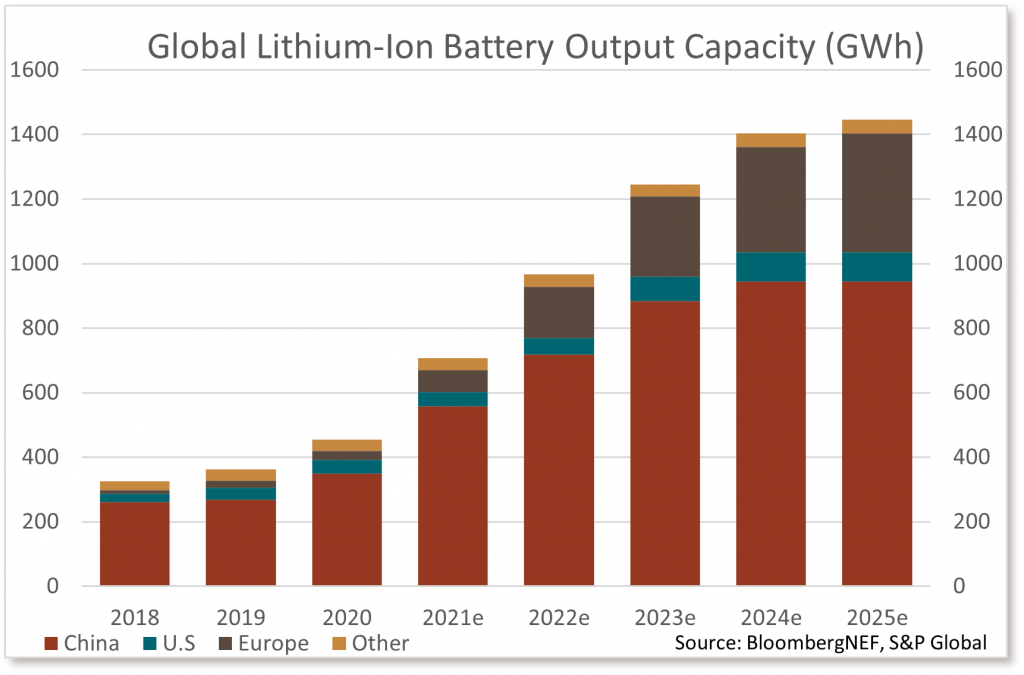 Within these leading lithium-producing nations, the mining companies themselves make up an oligopoly, with three firms controlling most of the world’s output: Albemarle Corp, Sociedad Quimica y Minera de Chile (SQM), and Ganfeng Lithium.

The concentration of production power in the lithium mining industry is shown most dramatically by looking at the Salar de Atacama in Chile today. We can see the operations of Albemarle (bottom complex) and SQM Chile (top two) in this satellite photo. This area alone holds approximately 29% of the world’s current reserves of lithium.

What causes concern is this lack of diversity – in lithium extraction, production, processing, and battery manufacturing – which analysts call concentration risk. Never have the world’s major energy resources been held in the hands of so few.

A wider variety of financial institutions and markets facilitates a wider variety of business enterprises with the potential to raise significant capital and thereby achieve maximum efficient scale. Traditional banks require collateral that can be readily resold if loans are not repaid, leaving them reluctant to make financial resources available for less tangible assets, such as technology or intellectual property. Therefore, technological innovation is significantly more robust in Britain, where alternatives to bank financing are plentiful, than in the rest of Europe.

What would the petroleum industry and world oil markets look like if only two or three nations controlled nearly all the reserves and supply? How would world governments react to only three firms owning more than 60% of annual production?

Geopolitics may force the supply chains to diversify. As nations move towards reduced carbon footprints, the incentives to capture part of these new value chains will grow. Nations will also want to secure their future energy supply lines, the same way they did after World War II through agreements with petro-state governments in the Middle East and elsewhere.

As the world moves away from a carbon-based economy however, how will these relationships change? What will become of the economies who were dependent almost exclusively on petro-exports? What region(s) will become the new geopolitical-energy focus? Which nations will become the new lithium-export leaders?

For more insights on investing in international sustainable energy markets, read our recent newsletter about the carbon offset trading industry.

Paradoxically, the rechargeable battery supply chain’s concentration creates some environmental hazards. Lithium-brine operations often take up to 65% of the local water supply in the high deserts of Chile. And that is on top of the region’s heavy copper mining operations, which are also water-intensive. Local populations have reported water shortages and distress with crops and livestock. Much of the water is lost to evaporation as part of the production process too, never to return, due to the harsh, dry climate of the salars.

Nonetheless, the promised benefits of reduced carbon emissions are driving further demand for lithium-ion batteries. While overall auto sales fell last year during the pandemic, electric car sales increased in the U.S. and worldwide, up 40% for battery-powered EVs and up 74% for plug-in electric hybrids. The ever-falling cost of the battery packs that power EVs (see chart below) should further drive demand for these cars. Imagine what urban pollution levels will look like look like once EVs rise from 2% market share to 10 or 20%. 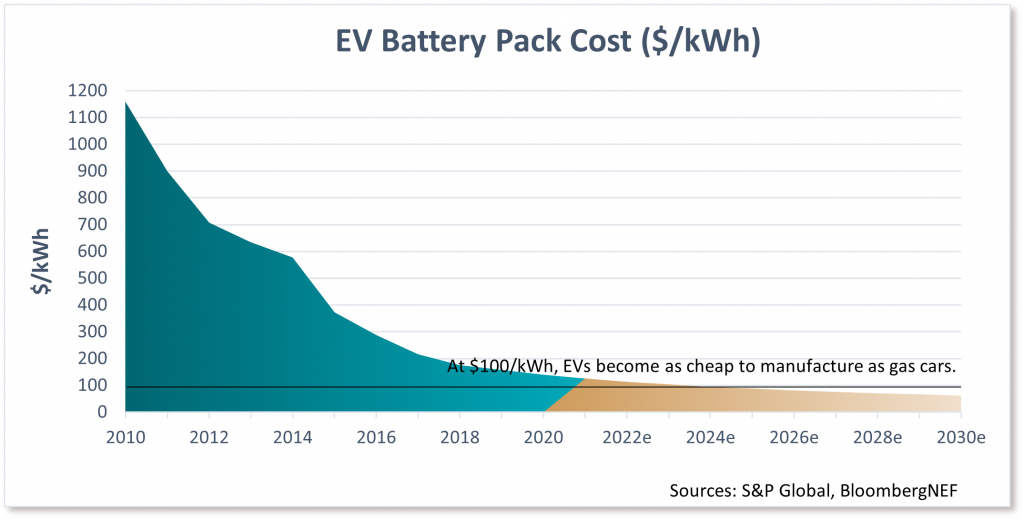 Think also about energy grids where solar and wind power can now be stored. With electricity warehoused in battery farms, power generation will be decoupled from immediate demand, time-shifted at scale for the first time in human history. Grids will be more durable against adverse climate events, no longer only reliant on traditional sources during peak-demand events. The worldwide storage capacity of these grids is expected nearly to triple over the next four years.

While energy storage and EV adoption are clearly the key drivers in the lithium space, obstacles remain. These industries are still in their infancy, with massive inefficiencies still present, and many firms will not survive. Supply chain kinks must be resolved, and global trade tensions must abate, for progress and innovation to occur.

These growing pains make lithium industries an unlikely investment target for GHPIA. But once we see stability in earnings, in ratios that reflect growth at a reasonable price, then some of these new companies may well find themselves on our radar. As long-term investors, we remain cautious about trendy, unproven companies. But we look forward with great interest toward what is likely to be the largest energy reset for the world in over a century. Whoever the winners and losers turn out to be, the lithium-ion revolution will likely be the energy recharge of our lifetimes.

The GHP Investment Advisors Global Markets Newsletter is published as a service to our clients and other interested parties. This material is not intended to be relied upon as a forecast, research, investment, accounting, legal or tax advice and is not a recommendation offer or solicitation to buy or sell any securities or to adopt any investment strategy. The views and strategies described may not be suitable for all investors. References to specific securities, asset classes and financial markets are for illustrative purposes only. Past performance is no guarantee of future results.