Will Energy Prices Bring Back the Doldrums of the 1970s? - GHPIA

The ongoing war in Ukraine sent shockwaves through global capital markets in the first half of 2022. Perhaps the most affected area of the market is the energy sector. Crude oil, the ultimate global commodity, has surged at times to well over $100/barrel, and natural gas prices have skyrocketed 50% in the US and Europe. As a result, economic observers have made comparisons to the price shocks we saw in the 1970s, when geopolitical conflicts caused dramatic increases in energy prices, leading to stagflation (high inflation along with slow economic growth) and a worldwide recession.

Are these fears justified? Are we reliving the 1970s? When you fill up your gas tank, it may feel like it. But before you crank up the Bee Gees on your 8-track player, let’s examine key differences between then and now.

Not All Price Shocks Are the Same

There were several reasons for the crude oil price increase we witnessed leading into 2022, notably, consumer demand strengthening as the world moves on from the pandemic and key producing countries continuing to throttle down output. Russia’s invasion of Ukraine, however, shifted supply-demand dynamics once again as the United States and the European Union, among others, imposed sanctions on Russian energy exports. The sanctions threw a wrench into global supply, since, according to the 2021 BP Statistical Review of World Energy, Russia is the third-largest producer of crude oil – pumping 10.6 million barrels a day, or 12% of world output – but consumes only 3% of the world’s output. This supply-demand imbalance allows Russia to export most of its crude production, about 7 million barrels a day, to countries such as China, the Netherlands, and Germany.

These factors, both before and since the invasion, sent the price of crude from just below $60/barrel in early 2020 to just over $110/barrel at the end of June. While this increase of more than 80% is considerable, during the 1970s oil prices were up over 1,000% (see Chart 1)! The 1970s saw OPEC, which controlled 55% of global output, unexpectedly cut all exports to Western nations. The 1979 Iranian Revolution further dented supply. While Western economic sanctions against Russia have exacerbated the oil price shock, even the complete removal of Russian oil (only 12% of world output) would not compare to the oil crisis five decades ago.

The U.S. Has Achieved Energy Independence

Around 2005, there occurred the “Shale Revolution,” when U.S. producers combined hydraulic fracking with horizontal drilling techniques, increasing the recovery of molecules and changing the entire landscape of the global energy market. This method, along with the repeal of the crude oil export ban in 2015, allowed the U.S. to become a net exporter of energy in 2019, the first time since 1952 (see Chart 3). While imports continue to be necessary to meet domestic demand (for reasons that include oil viscosity and the refining process), the U.S. reliance on foreign countries for fuel significantly declined over the years.

While global demand for oil has grown over the past half century, we consume it more efficiently. Global oil intensity is a metric that tracks the number of barrels needed to produce $1 million in GDP. In the early 1970s, the world was using about 800 barrels of oil to produce $1 million in GDP. Today, we are using about 200 barrels to produce that $1 million (see Chart 4). Global oil consumers are not using less oil — total consumption has nearly doubled since the 1970s — but consumption is far more efficient with advances in technology. For instance, back in the 1970s the average light duty vehicle averaged 13 miles per gallon, compared to 25 miles per gallon today. Dependence on oil has declined at a near-constant rate through wars, global recessions, asset bubbles, and pandemics.

U.S. Energy Burden Remains Low, EU, Not So Much

Yet another dissimilarity from the disco era is consumers’ ability to absorb increasing energy prices. Back in the late 1970s, the energy burden (cost of oil, gas, and coal consumption) in the United States reached nearly 12% of GDP. Today, that figure is estimated at only 4.4% of 2022 GDP (see Chart 5 below). On the other hand, the EU’s energy burden is expected to approach all-time highs (estimated at 9.1% this year) while still not surpassing the levels of the late 1970s.

Unlike the energy-independent U.S., the European Union is seeing this uptick because it still relies heavily on imports to meet demand. Russian production accounts for about 21% of the EU’s daily crude consumption and about 38% of its daily natural gas consumption. While many analysts believe the EU will be able to replace Russian crude with imports from other countries, Europe’s reliance on Russian natural gas will likely persist, keeping natural gas prices higher for the near future. To replace the nearly 13 billion cubic feet per day the EU receives from Russia via pipeline, member nations such as Germany (the EU’s largest natural gas consumer) would need to secure long term liquified natural gas (LNG) contracts from producers such as the United States, Qatar, or Australia (the 3 largest exporters of LNG). Even if they succeed at locking in contracts, it will take years for new capacity to be constructed to meet the supply shift to LNG.

While crude oil and other hydrocarbons remain crucial to everyday life, the energy landscape has changed since the 1970s. Price moves are not as dramatic as they once were, advances in technology have reduced the reliance on crude oil, supply is more diversified, and household energy burdens are lower than previous cycles. While rising prices at the pump will continue to eat into consumer wallets, the reduced impact fossil fuel prices have on the world economy make them merely one of many macroeconomic variables that global economists and investors should consider. Another decade-long saga of stagflation resulting from energy costs seems unlikely. 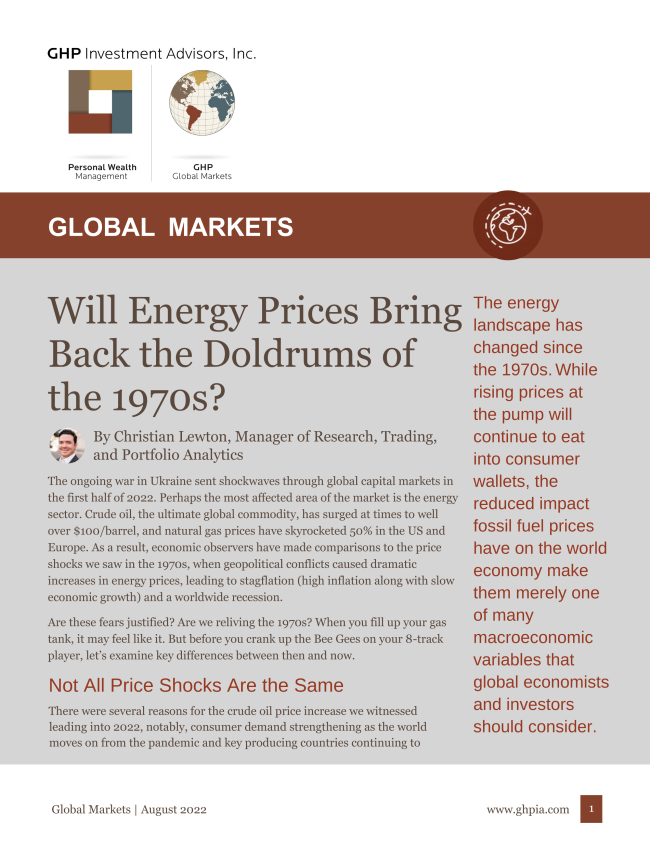