The United States financial ecosystem was Ground Zero for the Global Financial Crisis (GFC) of 2008, taking a harder hit than the financial systems of Europe. Yet the U.S. has rebounded faster and further than the eurozone economy. The reasons for comparatively sluggish economic growth in the eurozone have a lot to do with the region’s bank-oriented financial systems and the limited channels they offer for the free flow of capital. Fortunately, Europe is trending toward a more American-style capital marketplace, with such funding sources as stocks and venture capital taking on increasing importance. As a result, we expect economic growth in Europe to pick up speed.

Why The U.S. and Europe Recovered at Different Paces

If population were the only factor, the U.S. and the eurozone countries should have recovered at the same pace. The eurozone consists of the 19 countries in the European Union that use the Euro. The EU has 27 member states since Britain’s exit in 2020, only eight of which retain their own national currency. The population of the eurozone countries is approximately 340 million (including Germany, France, Italy, and Spain with a combined 258 million), while the population of the entire EU is about 450 million. With 332 million people, the U.S. is slightly less populous than the eurozone. Nonetheless, U.S. Gross Domestic Product (GDP) in 2021 was $23 trillion while GDP in the EU and eurozone were $15.7 trillion and $13.3 trillion respectively.

Much of the performance gap between the eurozone economies and the United States is related to the devaluation of the euro, from $1.48 in 2011 to $1.09 today (a 27% decline). In addition, U.S. economic growth averaged 2.3% per year over the past decade while eurozone growth was a more sluggish 1.3%. These two factors are related. Faster economic growth in the U.S. attracted investment, keeping dollar demand and interest rates higher than in Europe.

American outperformance over the past decade is a bit surprising. Remember, the United States was the epicenter of the GFC in 2008 and 2009. The GFC affected American financial institutions more severely than European banks. What triggered the GFC was an American housing bubble fueled with leveraged and risky mortgage lending. When the bubble burst, large U.S. financial institutions either failed, merged, or required government bailouts. Of course, European financial systems and economies also suffered from financial contagion, but their damage at the time was somewhat less acute.

Despite incurring steeper initial losses, the U.S. financial and economic recovery was nonetheless more robust than in Europe. By 2011, American financial institutions were on the road to recovery, but European banks were hit with a second “euro crisis.” Governments in Europe were more heavily intertwined in the financial system, either through direct ownership of financial institutions or via guarantees.

Banks in such eurozone countries as Italy and Greece suffered from weak balance sheets, but so did their heavily indebted governments. A government financial backstop only reassures investors and depositors if the government is solvent. Investors feared fiscally stronger countries such as Germany might balk at bailouts of weaker nations, threatening the continuation of the euro currency.

As we noted in our 4th quarter 2020 Global Markets newsletter “Brexit: No Big Deal,” financial systems in the eurozone are markedly different from those in the United States. Eurozone countries tend to rely on commercial banks, with a diminished role for alternative financial institutions and securities markets. For example, bank lending accounts for 83% of total financial capital in the European Union, whereas bank credit comprises 59% in the United States.

Even this number overstates the role of traditional banks in the U.S., since most of these loans are securitized into tradable bonds, while very little bank debt is securitized or tradable in the EU. As you can see from Chart 1, stock and bond issuance in the United States was almost threefold larger than the European Union over the past 6 years. Non-bank financial institutions such as private equity and debt funds play a much larger role in the United States. 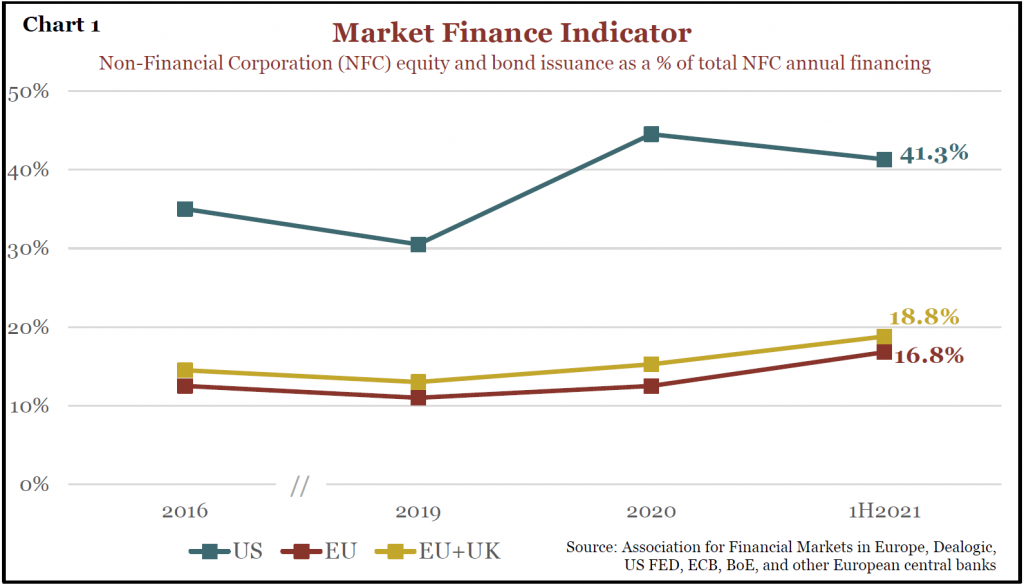 Reliance on capital markets and a variety of financial institutions in the United States contributes to greater volatility, but it also offers redundancy when banks get into trouble. With the EU’s heavy reliance on traditional banks, companies there could not fall back on alternative sources of capital during the GFC or the euro crisis. Unable to access capital, even at higher interest rates, most European companies limited employment, curtailed investment, and expanded operations very cautiously. As a result, economic growth in Europe was slower than in the United States.

The Prospects for Growth

Although investors are currently focused on the economic implications of Russia’s invasion of Ukraine, particularly the cost of energy in Europe, financial circumstances in the EU have improved in the decade since the euro crisis. Over the past ten years, European banks reduced bad loans and recapitalized their balance sheets. Chart 2 illustrates that European banks reduced non-performing loans from 7.5% of total loans outstanding in 2015 to 2.2% today. By comparison, bad debts at American banks peaked in 2009 at 5%, already dropped to 1.5% by 2015, and stand at 1.1% today.

Moreover, the EU adopted reforms to bolster capital markets and alternative financial institutions. Although starting from a low base, the trend is moving in the right direction. In 2015, European corporations tapped stock and bond markets for only 10% of their total financial needs. In 2021, however, capital markets supplied 17% of their needed external financial resources.

The Association for Financial Markets in Europe, which publishes an important report each year measuring key developments in EU capital markets, calls one of its metrics the “Risk Capital Indicator.” This gauge measures equity capital available to new ventures and growing businesses. The most important components of this indicator are venture capital and growth private equity. Chart 3 highlights that EU economies deploy far less risk capital than the United States, but the amounts of venture capital and growth private equity available to European business have expanded rapidly in recent years.

Although troubled banks and limited financial alternatives constrained eurozone economic growth over the past decade, the financial headwinds are starting to shift. Rising energy and food costs due to Russia’s invasion of Ukraine may compound the headwinds in the near term, but improvements to the European financial system are gradually increasing in speed. While not yet a strong tailwind, these financial developments will likely result in substantially faster economic growth in the coming decade. 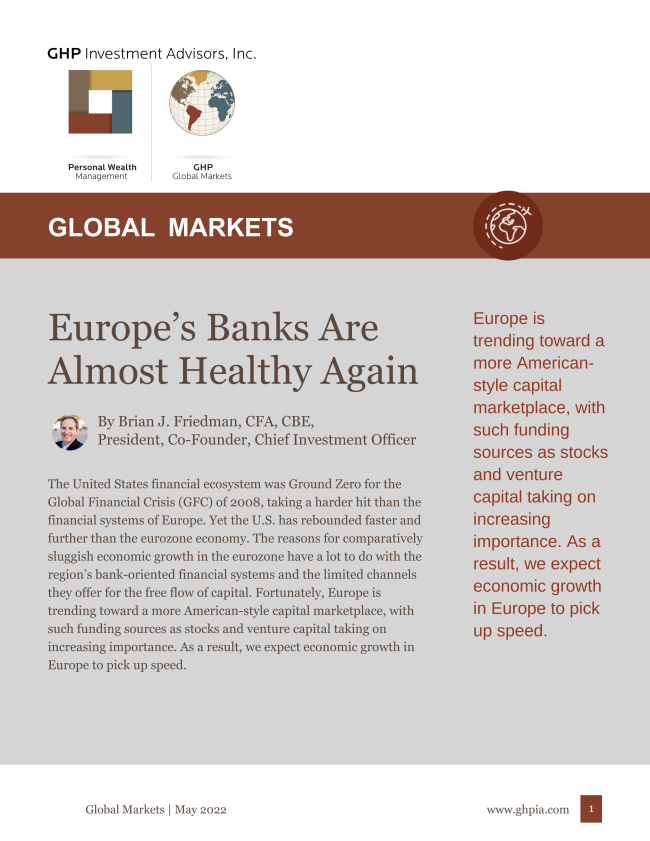