Historically‐low unemployment, growing wages, and other positive economic signals led the Federal Reserve to raise interest rates in recent years. This prevents the United States economy from accelerating too rapidly. Consequently, the United States dollar (“USD”) became more attractive relative to riskier emerging market currencies. Since the first 2018 interest rate hike in April, the MSCI Emerging Market Currency Index fell 7%, implying those countries’ currencies can buy 7% less of what they could before the collapse. Despite overall weakness of developing countries’ currencies, some were hit harder than others. More severe cases include the Brazilian real falling 16%, the Argentine peso depreciating 51%, and the Turkish lira dropping 32%. Turkey has made recent headlines due to its significant debt load and nontraditional fiscal policies contributing to its suffering currency. These factors, as well as less quantitative factors like legal system structure, make Turkey an unattractive investment, but this does not deem all emerging markets unappealing.

Why is Turkey in Crisis Mode?

Turkey has a long history of financial crises and recoveries. Not long after a successful International Monetary Fund (“IMF”) bailout expired in 2008, the global recession hit Turkey. Aiming to return Turkey to economic expansion and keep his reputation intact, Recep Tayyip Erdogan (prime minister at the time and current president) implemented growth‐at‐all‐costs policies. These policies included easier accessibility to foreign currency loans. While Turkey’s economy experienced impressive growth since, it came at the burdensome cost of corporations loading on excessive debt, much of it denominated in USD or euro.

Turkey’s foreign currency debt as a share of its gross domestic product is the highest of all emerging market countries at almost 70% (chart 1). As the Turkish lira depreciates, it costs borrowers more to finance and pay back debt in foreign currencies. For example, if a Turkish company held $10 million USD of debt at the beginning of 2018, that was equivalent to 38 million Turkish lira. By the end of September 2018, the company owed its creditors 61 million Turkish lira, 23 million lira more than just nine months prior. 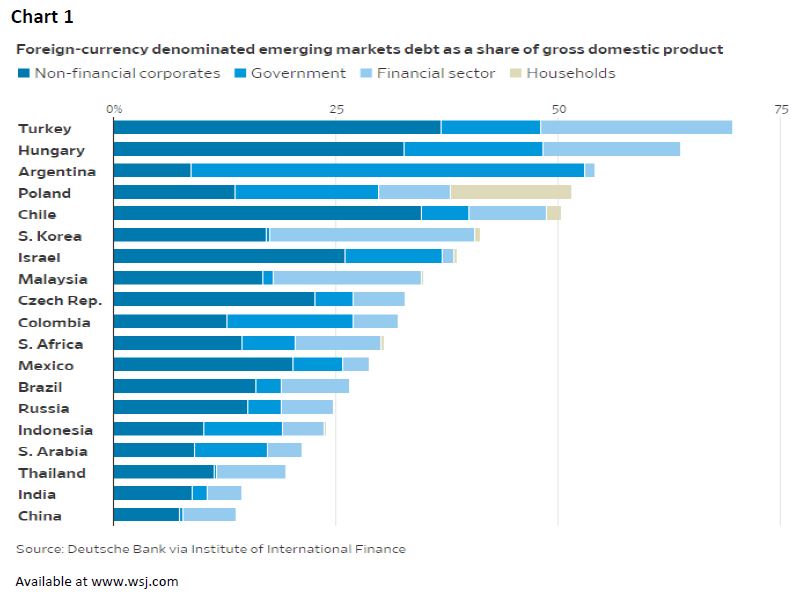 Adding to Turkey’s economic troubles, inflation skyrocketed to over 24% in September, as the lira’s depreciation ballooned the cost of imports. Economic theory states raising interest rates supports a depreciating currency, which in turn curbs inflation. However, Erdogan incorrectly argues that high interest rates actually cause high inflation. Turkey’s central bank stepped in on September 13th and raised interest rates from 17.75% to 24%, which triggered an instant 6% recovery for the lira, but Erdogan made his disapproval clear. Erdogan’s political methods are increasingly authoritarian since a failed coup attempt against him in 2016, so a power struggle will likely continue between Erdogan’s administration and Turkey’s central bank.

The good news is Turkey comprises a very small portion of the MSCI Emerging Market Index, which is considered the main indicator for emerging market stock health. Turkey accounts for less than 5% of the index. Many investors gain emerging market exposure by purchasing exchange traded funds benchmarked to the MSCI Emerging Market Index; therefore, these investors hold minimal exposure to Turkey.

On the other hand, international banks and governments maintain exposure to Turkey and the lira. For example, European banking stocks sold off in early August due to concerns regarding lending to Turkish clients. Data from the Bank of International Settlements indicated that as of March 2018, Turkish banks owed $81 billion USD to Spanish banks, $35 billion USD to French banks, and $18 billion USD to Italian banks. According to Reuters, BBVA (one of Spain’s largest banks) received 31% of its 2017 pre‐tax profits from lending to Turkish borrowers.

Moreover, investors can behave irrationally, fearing one country’s crisis is contagious across all emerging market countries. In turn, this can trigger an emerging market sell‐off. Turkey, South Africa and Argentina were hit particularly hard during this year’s rise of the USD, but there are contrasting examples like Taiwan and Chile, which only saw their currencies fall 3% and 8%, respectively. There are reasons for this imbalance. For example, foreign currency debt and a current account deficit surely play a role in South Africa’s struggles, but less quantifiable obstacles, such as corruption and legal system inefficiencies, are also at play.

At GHPIA, we consider those qualitative factors such as sound corporate governance and legal system structure when investing internationally. Evaluating countries using these metrics, rather than merely the size of the country’s economy, reinforces Turkey and South Africa are not attractive investments. We aim to invest instead in countries where positive structural changes allow for potential GDP growth, and until Turkey shows signs of economic reform, we will continue avoiding it. Furthermore, as the U.S. economy’s strength persists, and exchange rates fluctuate, we will monitor the effects on emerging and developed international markets and adjust our investments accordingly.