The Mighty Consumer to the Rescue - GHPIA %

Since the beginning of 2018, the global economy has been weakening, and investors continue to encounter a slew of data this year supporting this trend. The bond markets are flashing an ominous potential signal of recession, with yields inverting off-and-on many times during the last quarter. Burdened by the weight of slowing global trade, manufacturing indicators are now at contraction levels for most major economies worldwide, the U.S. included. Corporate earnings, while still in the black, declined for the last 3 quarters and appear to be continuing this trend into the second half of this year. Likewise, business investment figures declined from 2018 levels, as corporate bosses remain stymied by the direction of global trade negotiations or lack thereof. In response to these rather threatening themes, the Fed cut interest rates twice this quarter, which marked the first time rates were cut since 2008. Nevertheless, what is often lost this year within the din of negative economic news, the daily Twitter provocations, and stock market volatility is a vibrant U.S. consumer. Such a strong consumer spending backdrop is deserving of more attention, as it is quite possible this will be the economic driver keeping the U.S. from recession in the year ahead. 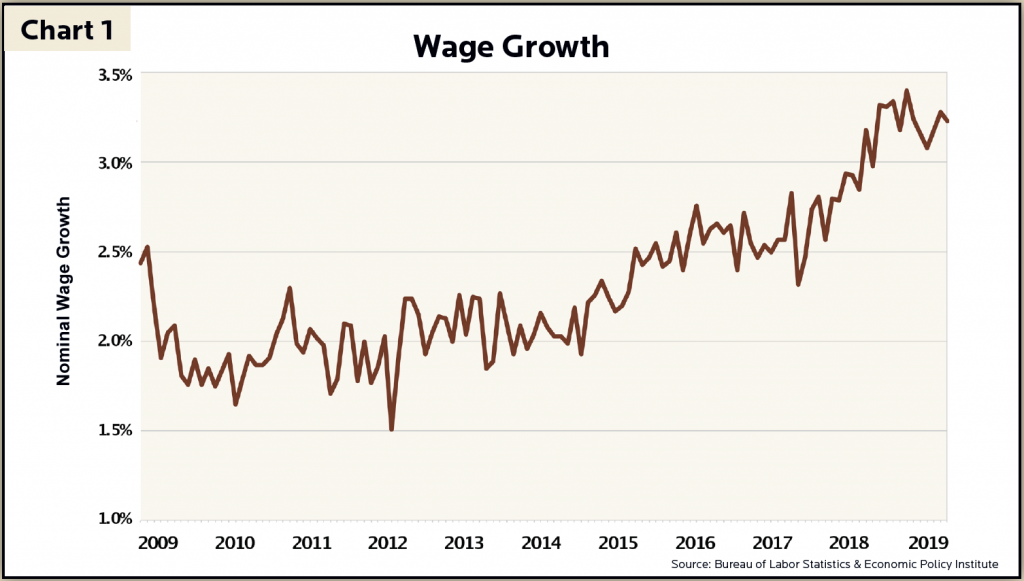 With spending as a major engine of economic growth, it is important to consider the current unemployment rate of 3.5% rests at a level only achieved twice previously over the past 70 years (during brief stints in the early 1950s and late 1960s). Further, not long after unemployment rates dropped below 4% last summer, healthy monthly wage inflation figures above 3% have been sustained, marking the first time wages have been so robust during this 10- year economic expansion (see Chart 1). Such a strong labor market helps to explain why consumer spending has been on the rise this year (see Chart 2), despite global economic headwinds stemming from escalating trade wars. The chart also demonstrates how most recessions follow a consistent period of declining consumer spending, unlike the present environment.

Of course, with rising consumer spending comes the question of whether such spending only rests upon excesses, like those of the debt-fueled housing bubble of 2008. Given the present strength of household balance sheets and rising personal savings rates, conditions this time around appear in stark contrast to the previous decade.

With wages growing faster than economic inflation, households have sustained savings rates more than double the levels maintained prior to the Financial Crisis (see Chart 4). In other words, while consumer spending increased over the past several years, this has not curtailed personal savings.

The health of the American homeowner cash flow statement is further evidenced when analyzing debt service payments (mortgage debt + auto loans + consumer loans) as a percentage of disposable income. Federal Reserve data calculated this ratio at over 13% in late 2007, and since that time it steadily fell to recent levels below 10%. Not only does this represent a 25% reduction in the raw percentage ratio, it is also the lowest level the ratio has rested at in the last 40 years. 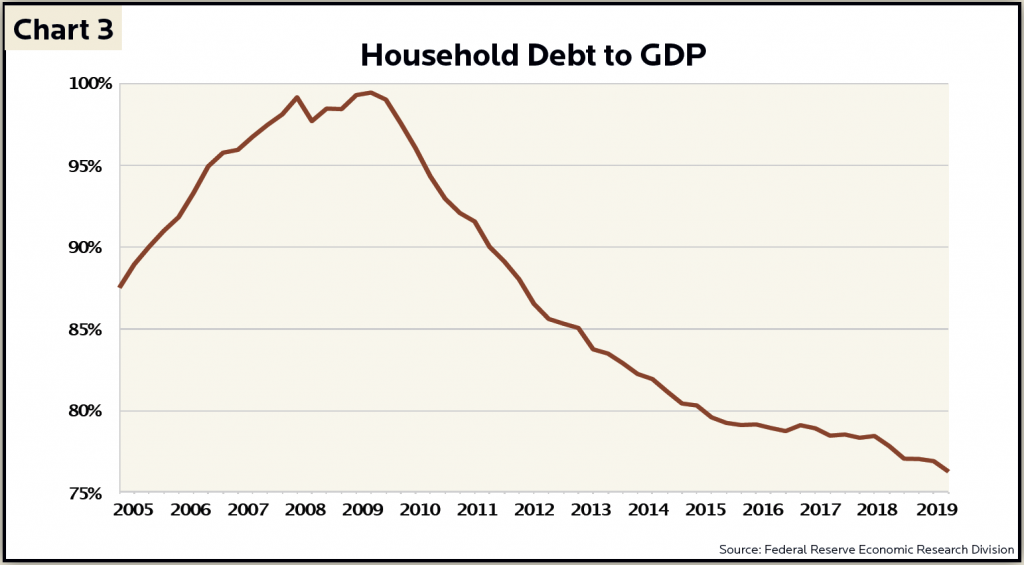 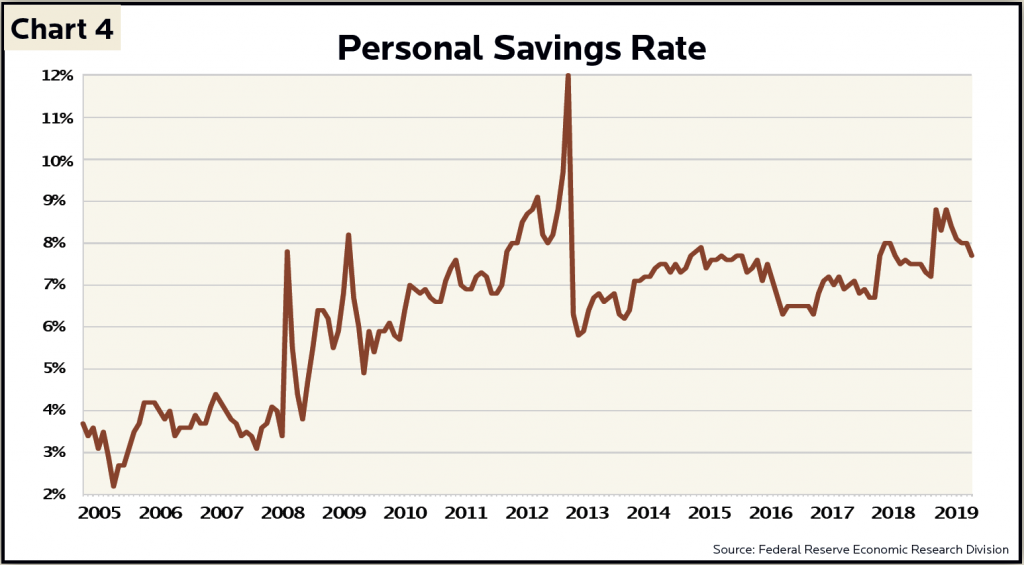 As a frequent shopper at big-box retailers, I never fully understood all the bellowing about the death of brick-and-mortar retailers, which seemed to reach a crescendo back in 2017. While it is clear there is a shift to online shopping, the doomsday warnings rendered towards brick-and-mortar seem to have belied the fact that many of these retailers are thriving as direct beneficiaries of strong consumer spending underpinnings.

The 3rd quarter offered yet another pronouncement of the strength of several well-known general merchandise retailers, home improvement retailers, and dollar discount stores – many of whom enjoyed record levels for their stock prices and phenomenal quarterly earnings results this summer. The most successful retailers this year adroitly executed “omnichannel” strategies, which essentially combine brick-and-mortar stores with e-commerce as one selling and fulfillment unit. In addition to robust in-store sales growth, several well-known brick-and-mortar retailers reported online sales growth over 20% this year, and their buy-online-pick-up-in-stores strategies are presenting a budding threat to e-commerce competitors.

Although further escalation of trade tariffs could put a dent into these impressive profit trends, most retailers appear to be reaping the benefits of healthy consumer spending across wide strata of household income brackets.

While gas prices rose during the quarter with the recent attack on oil production facilities in Saudi Arabia, overall prices remain moderate at $2.65/gallon. This level is below average inflation adjusted gas prices of $2.95 over the last 20 years, and it is well below the $3.17 average price over the last 10 years, according to the Energy Information Administration. Clearly the events in the Middle East were temporarily disruptive to global oil production capacity, but it will take significantly more reduction of global oil supplies before U.S. consumer spending is hindered by above average prices at the pump.

With the Fed cutting interest rates twice this quarter and 30-year fixed mortgage rates falling nearly 1.5% since the beginning of 2019, the housing market appears to be pulling out of a slump that began in 2018. August housing starts (i.e. the number of new residential housing projects begun for the month) rose to 1.364 million units, which was the highest monthly total since 2007. Stocks for home builders are likewise enjoying a resurgence this year, as lower rates and the prospects for increased homebuying activity are encouraging investors.

Investors Must Accept the Only Certainty is Uncertainty

The outcome of the September Federal Open Market Committee (FOMC) meeting on the direction of interest rates was a 0.25% cut and a forecast calling for no further cuts this year. However, it was interesting to note the internal uncertainty of the FOMC, evidenced by the wide array of proposed action for future rate policy. Five of the 17 officials of the FOMC did not want a September rate cut, five others called for this cut but no further cuts this year, while seven officials appealed for at least one more cut this year. While such discord within the FOMC is not uncommon, it reflects the mixed bag of economic signals investors must currently confront.

The ongoing trade wars will continue to create economic uncertainty, yet uncertainty will forever be wedded to the risks long-term investors must manage to achieve and preserve wealth. Further, despite the investor anxiety still present from the 2008 financial meltdown, it is not as if the U.S. economy currently looks like death eating a cracker. Nearly 70% of our economy is propelled by consumer spending, which proffers a compelling set of countervailing positive signals for the Fed and investors as they weigh the pessimism wrought by trade wars. Households have vastly improved finances, thanks in part to steady employment and rising wages, many anchor retailers are presently thriving, gas prices are moderate, and falling mortgage rates are beginning to boost housing activity. While nothing is ever certain, the current vitality of the U.S. consumer makes a strong case against a looming recession.