Japan – Improving Trends in the Land of the Rising Sun - GHPIA

Japan’s Prime Minister, Shinzo Abe, took a political gambit by calling a snap election in October. This decision appeared to pay off in spades as his ruling coalition won a supermajority by securing more than two-thirds of the seats within Japan’s parliament. As a result, Abe is now emboldened to continue his ambitious economic reform measures, termed Abenomics. With a boost from global economic recovery and now five years of focused economic reforms via Abenomics, Japan is beginning to show promising signs for investors after languishing for the last two and a half decades.

Big Macs and Decades of Deflation

Ever since a massive asset bubble popped and stock prices collapsed in Japan in 1990, the Japanese have had their hands full combating deflation. Japan’s lack of inflation can be easily observed when tracking the price of a Big Mac, which was 370 yen in 1990. Fast forward 25 years to 2015, and the price was still stuck at 370 yen. By comparison, during the same time frame in the U.S., the price of a Big Mac more than doubled, representing a healthy 3% annual inflation rate. This longstanding void of any material inflation or sustained growth has pushed a carousel of Japanese leaders to develop new and creative policies in an attempt to reinvigorate their stalled economy. The current initiatives of Abenomics, instituted in 2013, are beginning to deliver modest, yet consistent signs of economic growth, and nascent inflation trends are beginning to appear.

The Rise of Abenomics – Three Arrows Pointing the Way to Growth

An ancient Japanese parable describes how a feudal lord persuaded his three sons to remain united to protect the interests of his family by first presenting each son with a single arrow and asking them to try and snap the arrow. After each son quickly snapped their arrows, the father then placed three arrows together and asked his sons to try and break them. When they were unable to break all three arrows at once, the father explained how one arrow could be broken easily, but three together were unbreakable.

Abenomics targets “three arrows” of economic policy reform, namely monetary (quantitative) easing, fiscal stimulus and structural reform. The goal of these reforms is to reverse decades of stagnation by suppressing the Japanese yen, increasing exports, expanding trade agreements and pushing inflation up to a 2% target. Abe embarked on this ambitious 3-pronged reform program by first authorizing a large fiscal stimulus package ($116 billion USD equivalent) along with setting a mandate for the Bank of Japan (BOJ) to engage in monetary easing of roughly $700 billion (in USD) per year. Such stimulus measures have added heavily to Japan’s already high levels of government debt, while the BOJ printing presses, still whirling to this day, have more than tripled the size of the central bank’s balance sheet, putting it on par with the balance sheet size of our Federal Reserve (serving an economy more than 3 times the size of Japan). While government spending and monetary easing arrows flung by Abenomics can be objectively quantified, the third arrow of structural reform is more complicated to analyze.

The unique economic system dominating Japan after WWII is known as the keiretsu, which is a grouping of interlocking business enterprises centered on a core bank. There are six major keiretsu (e.g. Mitsubishi, Mitsui, Sumitomo, etc.) all maintaining cross-shareholding relationships with each other to help prevent takeovers and stock fluctuations.

As Japan’s economy has stagnated for several decades now, these keiretsu have been criticized for their protectionist tendencies which structurally skew favor towards companies and employees at the expense of shareholders. One example of this is displayed with the lagging returns on shareholder equity for Japanese stocks when compared to U.S. stocks (Chart 1).  Thus, the current thrust of Abenomics is to further dampen the influence of these keiretsu by promoting shareholder activism and corporate governance reform. Abe’s reforms aim to shake up formerly docile corporate boards, which have received the worst rankings in the developed world for their small proportion of independent directors and female board members. Further, Abenomics encourages institutional investors to pressure companies to implement changes to improve shareholder returns. While bold, this third arrow of Abenomics will likely progress slowly as it is attempting to undo 60 years of cozy Japanese corporate culture that, until now, viewed shareholder activists as anathema.

With three arrows fired, five years of policy focus and now a reinforced mandate rendered by the voters, Abenomics is showing some indications of success. Likewise, support from a global economic recovery has helped to produce many positive trends for the Japanese economy in 2017. The unemployment rate fell to 2.8%, its lowest level in over 25 years. Profits as a percentage of sales for Japanese companies have steadily climbed to 7%, up from a 30-year average of only 3%. GDP grew for the 7th consecutive quarter, delivering the longest trend of consistent economic growth in Japan in the last 16 years. Stock prices tracked by the Nikkei Index rallied over 20%, leading to their highest level since the massive bubble and crash of the early 1990s. Finally, even persistently stubborn consumer price deflation trends appear to be abating as core inflation, albeit slight, has been steadily climbing for the past year.

While even mild inflation signals are a welcomed trend in Japan after struggling with decades of deflation, these inflation trends have yet to propagate through to employee wages. Much like the U.S. and several other recovering developed economies, wages remain stagnant in Japan, which has kept a lid on consumer spending and organic growth. Risk factors also persist with Japan’s shrinking and ageing population. With the largest percentage of its citizens over the age of 65, low birth rates, and minimal immigration, Japan must confront the worst demographic trends in the developed world.   Another troubling development lies with Japanese debt. Japan now carries a debt-to-GDP ratio of 250%, which is much higher ratio than oft-cited Greece and more than double that of the U.S. Finally, geopolitical tensions with neighboring North Korea represent additional risk factors for investors. Despite recent investor enthusiasm for Abenomics, these ongoing risks have been a headwind for Japanese stock prices as they remain cheaper, at discounts of 13% or more, when compared to U.S. stocks at year-end (Chart 2).

While shareholder reforms will likely remain a slow-moving campaign for Abenomics, it is encouraging to witness return on equity trends rising closer to U.S. ratios (as seen in Chart 1, years 2016-17). With the labor shortage now confronting Japanese employers, it is plausible wage inflation will finally emerge in 2018, propelling consumer spending. Moreover, if the global recovery continues into 2018, robust Japanese export growth will further support the economy. With the three arrows firing under Abenomics combined with a fourth arrow of global economic recovery, the case for Japan has undoubtedly strengthened. However, when weighing the risks presented with Japan’s debt and demographic trends, we have elected not to increase our Japanese investment allocation, but the positive developments stemming from Abenomics have our attention as we set forth into the new year. 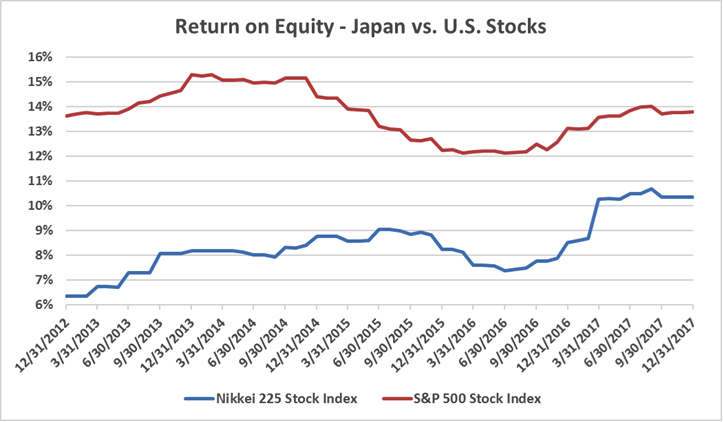 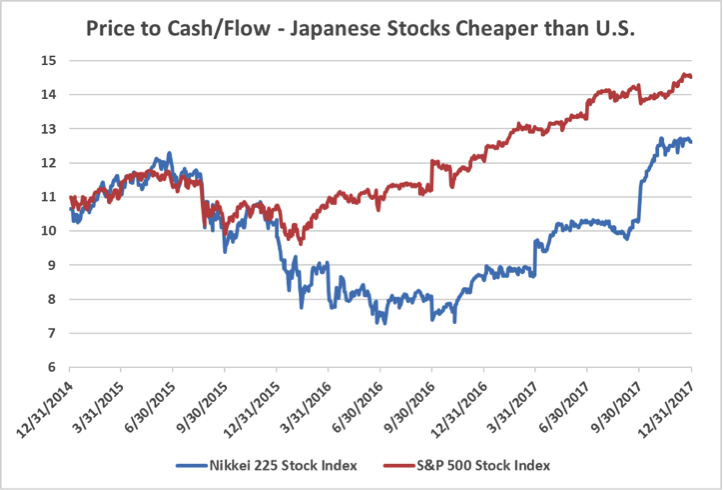