How Will the Election Affect Your Investments? - GHPIA

Investors seem to share one concern: If the other party wins the presidential election, the country will fall into ruin, the economy will crater, and their portfolios will suffer the consequences. Investors may be wondering what moves they should make to cushion their portfolios against the possible tax repercussions of a Biden presidency or the possibly worsening trade wars of a Trump re-election.

At GHP Investment Advisors (GHPIA), we are accustomed to taking the long-term, 30,000-foot perspective of world events, including presidential elections. In our view, long-term macroeconomic trends are likely to continue as they have, no matter who wins the election. As our research shows, in the long run, the market does not seem to care which party holds the White House.

The Dow Is Neither Red nor Blue, But It Is Green 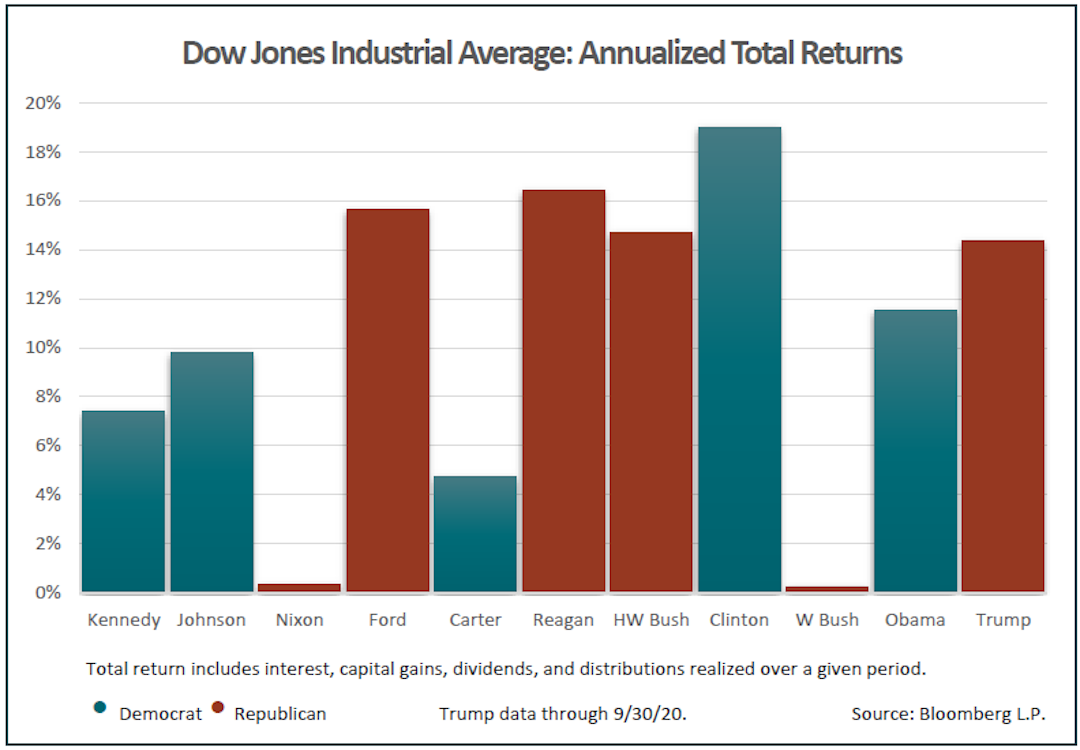 Does the stock market fare better under Republican or Democratic administrations? As you can see in the chart above, over the last 60 years, the value of stocks listed in the Dow Jones Industrial Average (the Dow) has risen under presidents of either party. If the returns for each administration are annualized, it is hard to conclude that the Dow performs better under one party than the other. Even presidencies that endured major financial crises – including those of Nixon, Carter, George W. Bush, and Trump – averaged positive annual returns. Some presidencies saw much greater annual growth than others, but all saw growth. That is one reason why we are encouraging investors, whatever their financial strategies are, not to make drastic, short-term changes.

If the Dow were an index fund that you had purchased when John F. Kennedy was elected in 1960, and you had held those fund shares through today, you would have seen, over 60 years and 11 administrations, a cumulative 7794% return on your investment. Over a long enough time horizon, the peaks and valleys of individual presidencies seem much less significant. 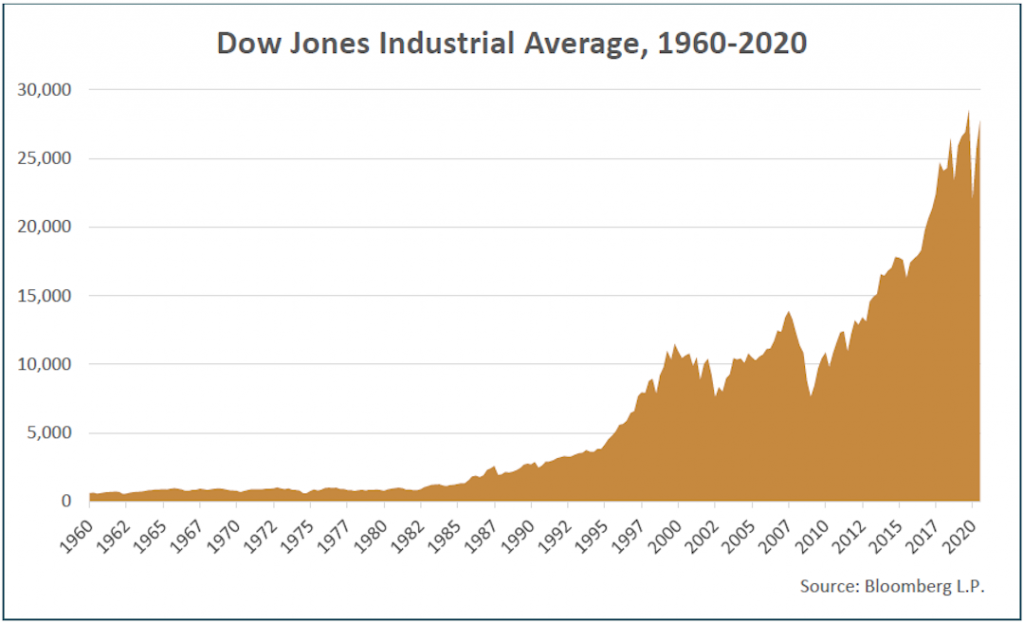 The Limits of Presidential Power

Why does the Dow not respond to the party in the White House? One reason is that presidents can only do so much to affect the economy in the face of major worldwide events. The COVID-19 pandemic is a stark illustration. No matter who is president in 2021, coping with the lingering effects of the pandemic will hobble his ability to embark on a sweeping domestic agenda. The Federal Reserve, which operates independently of the presidency, Congress, or partisan politics, has indicated that it plans to keep interest rates at the current near-zero level through the end of 2023 in order to aid with economic recovery.

If, after the election, we still have a divided Congress, or a Congress run by the party opposite the one in the White House, then gridlock may prevent the president from enacting radical economic changes. Even if the presidency, the House of Representatives, and the Senate are all aligned, the Senate may not be able to resist a filibuster from the minority party that would also obstruct radical change.

Taxes: Plan for What You Know

Some investors are worried that Biden’s tax plan will drive stock prices down and their own taxes up. Nonetheless, we at GHPIA are not advocating that investors make significant changes to their portfolios based on the election’s possible tax consequences. After all, no matter who wins, the president will have to continue with deficit spending in order to stimulate recovery from the COVID economic shutdown. Eventually, to repay that skyrocketing debt, taxes will likely rise no matter who is in office. At GHPIA, we tend to find it futile to speculate on tax law changes that may or may not occur, which is why we advise clients to plan for what you know. That is, plan with the existing tax code in mind.

Whoever wins in November, a lot of investors will likely panic over how the results will affect the market. Most of the time, however, it is wise to hold when others are panicking and selling. At GHPIA, we do not believe in trying to time the market, since it is hard to identify peaks and troughs until after they happen. Instead, we encourage investors to maintain the discipline of a long-term strategy and to hold diversified portfolios of reasonably valued companies in different sectors and asset classes. That way, investors can be poised for long-term capital growth while mitigating short-term risks from impactful world events, including presidential elections.

This material is not intended to be relied upon as a forecast, research, investment, accounting, legal or tax advice, and is not a recommendation, offer or solicitation to buy or sell any securities or to adopt any investment strategy. The views and strategies described may not be suitable for all investors. References to specific securities, asset classes and financial markets are for illustrative purposes only. Past performance is no guarantee of future results.