Foreign stock markets are very inexpensive. A good indicator of value – particularly for international comparisons – is the Price-to-Cash-Flow (P/CF) ratio. Right now, the P/CF for the S&P 500 Index is about 13. If companies earn $1 per year in cash profits, and an investor pays $13 for that stream of annual dollars, then simple math tells us that 1 divided by 13 is a yield of 7.6%. This would be our return if we bought-out the companies in the index and pocketed their profits. We might do even better than this if cash flows continued to grow in synchronization with the overall economy.

As illustrated in Figure 1, the P/CF for the MSCI EAFE Index (Europe, Australasia and the Far East) and the MSCI Emerging Markets Index are both approximately 7. Since $1 per year in annual cash profits can be purchased for $7 today, this implies a 14% yield! The MSCI EAFE Index is a particularly good value since it tracks mostly developed countries with higher quality legal and financial systems. One year ago the EAFE sold for a 27% discount to the S&P 500, but the valuation gap has since expanded to 45%.

One Darn Crisis After Another

A mild recession in 2013 triggered by the euro crisis, followed by further currency weakness and economic stagnation, constrained European stock valuations. Despite limited earnings growth, most European companies remained profitable. Indications are good that European economic growth is now accelerating, albeit at a still anemic pace by historical standards. 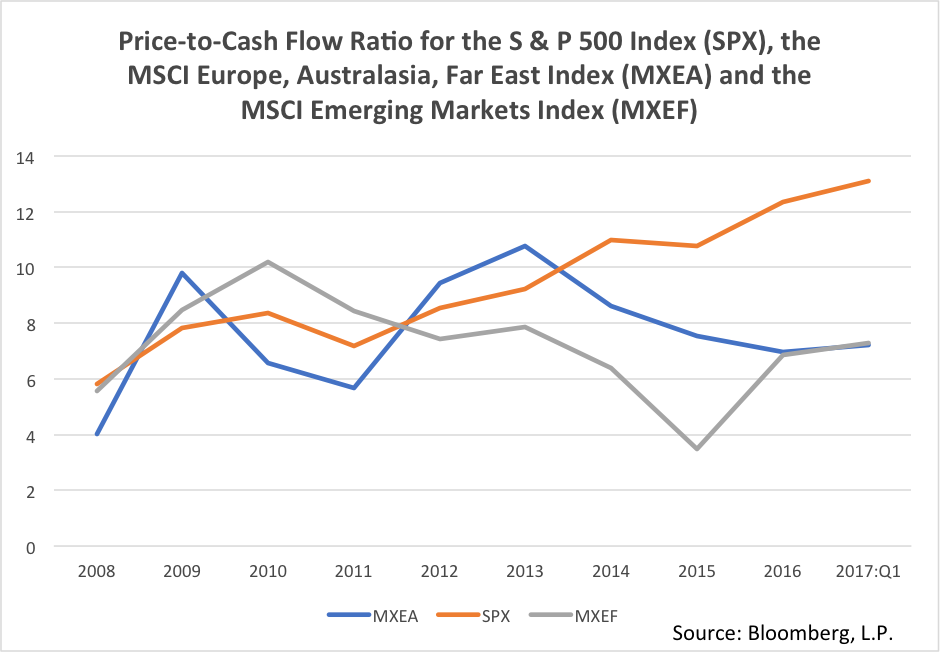 Many emerging market countries suffered through economic, currency and financial market chaos starting in mid-2014 through early 2016. While some remain in recession, most bottomed in late 2016. Meanwhile, panic that the Chinese economy was on the precipice of crisis proved unfounded. Two major waves of selling pressure in August 2015 and January/February 2016 were sparked by fears that China would massively devalue the yuan. As we wrote in two of our prior newsletters1, we believe the Chinese economy will continue to decelerate but not implode.

Adding to the global turmoil were plummeting prices for oil and other commodities in late 2014 through early 2016, which put further downward pressure on the currencies and economies of commodity-exporting nations. Even strong natural resource exporters, such as Canada and Australia, felt the pinch. Fortunately, prices for oil, metals and other commodity products rebounded in 2016. Some analysts predict a slow but renewed commodity up-cycle. Even if they are wrong, most surviving natural resource extraction, processing and distribution companies around the world are now profitable.

Amidst these immense pressures global economic growth declined in 2014, 2015 and early 2016. Now the international economy appears to have bottomed. At a P/CF of 7, economic stability should be enough to deliver healthy returns over time. If growth accelerates then international stocks could shift from the dogs of our portfolios to the darlings.