We use the term “Emerging Markets” to describe poorer countries that vary tremendously. Some are partially industrialized and some still predominantly agrarian or tribal. Some are democracies, and some are authoritarian; most lie somewhere in between. Corporate governance is better in some nations than in others. All are plagued with varying degrees of dysfunctional or corrupt legal and political institutions. Despite extended periods of rapid economic growth that can excite investors, history shows that shockingly few countries “emerge” into wealthy, developed economies.

It’s Hard to Get a Seat in First Class

A good indicator of comparative economic development is Gross Domestic Product (GDP) per capita. GDP per capita is a measure of average annual income in US dollars per person in a country. While GDP per capita is not a perfect metric – income disparities are more glaring in some countries than others, and currency fluctuations complicate global comparisons when translated into dollars – GDP per capita does correlate with many other indicators of material living standards. It is a reasonable proxy for a country’s level of economic development.

According to World Bank data tracking 195 countries (only Venezuela and North Korea are excluded), GDP per capita currently ranges from a low of $293 in Burundi to $104,499 in Luxembourg. GDP per capita exceeds $25,000 in 40 countries. With a total population of 1 billion, these 40 countries comprise just 13% of the world’s 7.5 billion people.

Of those 40 countries, however, 16 are either microstates with populations well below 1 million, petrostates where oil revenues comprise the lion’s share of GDP, or protectorates and tax havens. These are such states as Aruba, Puerto Rico, the Cayman Islands, Kuwait, or Qatar. The remaining 24 larger advanced economies include all the likely suspects, such as the United States, United Kingdom, Germany, and France. Seven of these “emerged” more than a century ago as leaders of the industrial revolution in the 18th or 19th century. Five others – Japan, Italy, Spain, Finland, and New Zealand – developed haltingly in the late 19th and early 20th century but emerged as industrialized nations in the second half of the 20th century. Only six countries – South Korea, Taiwan, Hong Kong, Singapore, Ireland, and Israel – vaulted from poverty into the elite club of developed economies after World War II.

There are significant income disparities among the 24 developed economies. At the cutting edge of economic development are countries like the United States, where GDP per capita is approximately $60,000 per year. Besides the U.S., there are only 7 other countries – Switzerland, Norway, Ireland, Singapore, Denmark, Australia, and Sweden ‐‐ whose GDP per capita exceeds $50,000. GDP per capita is $45,000 in Germany, $39,000 in France, $28,000 in Spain, and $25,000 in Taiwan. All four of these countries are more likely to converge with current U.S. income levels than almost all countries classified as “emerging markets.”

At the other end of the spectrum, there are 88 countries with a total population of 3.7 billion where GDP per capita is $5,000 per year or less. India’s 1.3 billion people comprise 1/3 of this very poor group. Most of these countries remain predominantly agrarian, with industrial or commercial development limited to a subset of the population. Even urban areas in these countries are primarily characterized by small scale production and trade, with large industries often monopolized or cartelized.

Only 434 million people, or 6% of world population, live in upper‐middle‐income countries. Eight of these countries are microstates, while another four are petrostates, such as Saudi Arabia or Oman. This leaves 21 countries knocking on the door of high‐income convergence.

An interesting phenomenon becomes apparent when we narrow our focus onto the 21 upper-middle‐income countries. Thirteen of them are European, 11 of which are former‐Eastern Bloc countries. Including Russia’s 147 million people, about 224 million people live in these formerly communist, European countries. The 30 years of economic transition since the Berlin Wall fell in 1989 provide a natural laboratory to better understand economic “emergence.”

At GHP Investment Advisors, Inc., we use these data, other quantitative sources and our own qualitative analysis to inform our international investment allocations. The data tell a compelling story about economic development that is intuitive, yet often at odds with common public perceptions.

For example, the World Bank’s Rule of Law score for the United States is a respectable 1.6, similar to Germany and a bit higher than France at 1.4 (see Figure 1). All 24 advanced economies score well on most of the six indicators. The story gets complicated, however, as we explore the 22 formerly communist Eastern Bloc countries. Five countries – Albania, Georgia, Kosovo, Moldova, and Ukraine – all have GDP per capita below $5,000. Another six are lower-middle‐income, i.e. GDP per capita is between $5,000 and $10,000 per year. 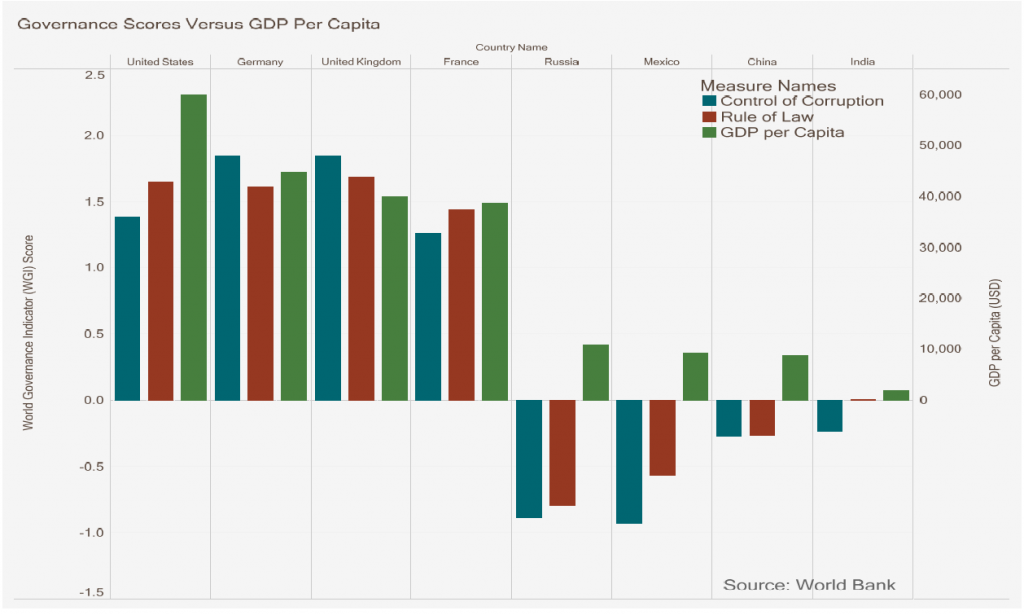 Of the 11 remaining upper‐middle‐income, formerly Eastern Bloc countries, Slovenia, the Czech Republic, Estonia, Lithuania, and Latvia all received solid Rule of Law scores, ranging from 0.9 to 1.3. Their average Control of Corruption score was decent but not spectacular at 0.7 (for comparison, the United States scored 1.4, Germany 1.8 and Sweden 2.1 in the World Bank’s system; see Figures 1 and 2). GDP per capita for these five countries ranged between $16,000 and $23,000. With their respectable governance and solid economic growth, odds are good for these countries to join the elite club of fully developed economies in the coming decades. Unfortunately, only 24 million people live there. 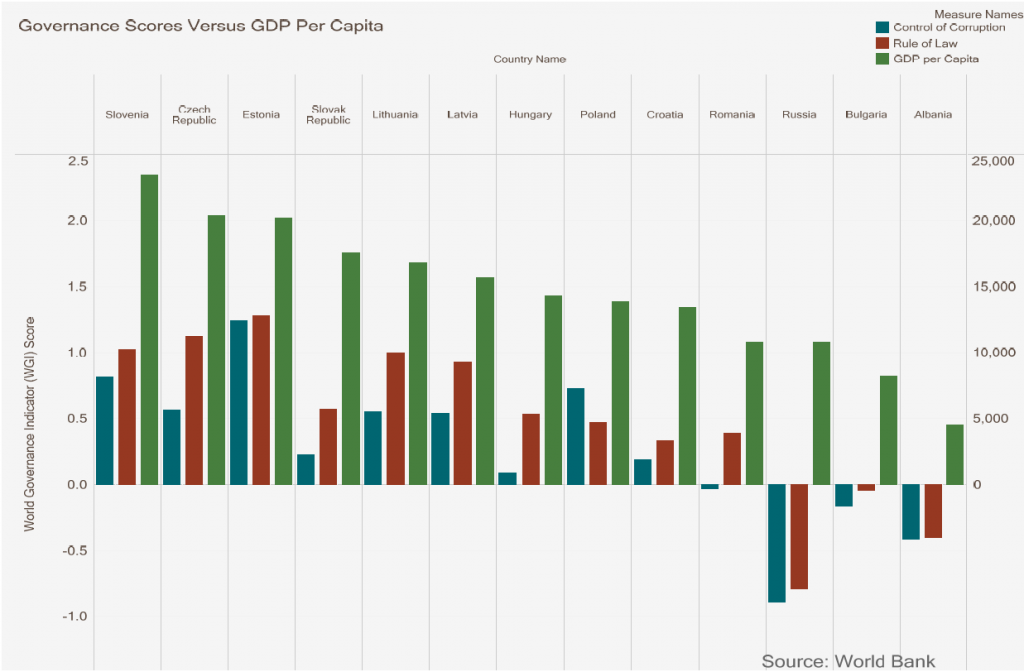 The odds that the Slovak Republic, Hungary, Poland, Croatia, and Romania will attain greater wealth are longer but reasonable. With a collective population of 77 million, these countries generally received mediocre but still positive Rule of Law scores between 0.3 and 0.6. Those scores, along with middling corruption scores that average out to 0.2, correlate with an average GDP per capita for this group about 26% lower than their better‐governed, formerly Eastern Bloc peers.

Russia, the 11th formerly European communist country in the upper‐middle‐income group, is a corrupt petrostate. Oil and gas account for more than 30% of GDP. This oil wealth allows Russia to outperform its very weak Rule of Law score of ‐0.8 and Control of Corruption score of ‐0.9.

GDP per capita in Russia is $11,000. Comparable countries with similarly low governance scores but without significant oil reserves are much poorer, including Bulgaria ($6,000), Ukraine ($3,000), and Albania (under $5,000). According to the WGI data, governance in Russia is more dysfunctional than in poorer countries such as Mexico, Brazil, Thailand, Colombia, and South Africa.

Wait a Minute… What About China?!

China is the world’s second‐largest economy, is a leading industrial exporter, and it achieved astonishing economic growth over the past 30 years. Chinese stocks comprise 30% of the leading MSCI Emerging Markets Index. Surely, China is either already a developed country or pretty darn close to becoming one, right?

China has a massive $12 trillion economy, but that does not make it an economically developed society. Divide that figure among 1.4 billion people, and you have a GDP per capita of just under $9,000. At that level, China is still a lower‐middle‐income country.

Despite its rapid economic growth out of extreme poverty in recent decades, China’s prospects for emergence into an economically advanced society are dim. China scores a poor ‐0.3 for both Rule of Law and Control of Corruption. That’s better than ‐0.6 on both scores 20 years ago, but it’s still not at Eastern European levels. Even after some governance backsliding in recent years, Hungary and Poland still score substantially higher than China in all the WGI indexes. China’s lethargic pace of improvement will ultimately be a barrier to very high levels of GDP per capita.

China suffers by comparison to the formerly European Eastern Bloc countries on the other World Bank measures as well. China scores ‐0.1 for Regulatory Quality – better than Russia’s ‐0.5 but worse than the positive scores for Poland, Hungary, the Czech Republic, and Slovenia. China’s only positive score is for Government Effectiveness (0.5), reflecting its strong state institutions, but that is still a lower score than every formerly Eastern Bloc nation, except Romania and Russia. The remaining nine countries averaged 0.9, quite a bit better than China but still distant from the 1.6 scored by the U.S. and Germany.

To put China’s scores in a global context, Mexico scored ‐0.7 for the Rule of Law, ‐0.2 for Government Effectiveness, 0.2 for Regulatory Quality, and ‐0.9 for Control of Corruption. Generally worse than China, but not by much. With continued modest governance improvements, China can evolve into an upper‐middle‐income country, but fully developed status is unlikely without more substantive reform.

Why Does Poor Governance Prevent Emergence?

The correlation between good governance and economic development is not just a historical coincidence. In fact, it’s a matter of transaction‐cost economics. In well‐governed countries, power and resources tend to be distributed among a plurality. Trust in institutions of politics and law allows for greater belief that property and contract rights will be secure. This in turn allows for lower transaction costs, which loosen up an economy to provide a greater variety and frequency of possible transactions. Capital flows more freely, more investment takes place, greater innovation occurs, more value is created, and economic development accelerates and is more evenly distributed.

Conversely, in poorly‐governed countries, power and resources tend to belong to oligarchies. With little faith that the law will protect property and contract laws and with tight control over the flow of capital, transactions become costly, so fewer transactions, of lesser diversity, occur. The result is less investment, less innovation, less creation of value, and, ultimately, economic instability. Unless these countries experience fundamental reforms in governance that make their capital markets a more hospitable place for investment and innovation, their wealth will likely remain concentrated in the hands of the few, and their economies may never emerge into the elite caste of wealthy nations.

We Know the Development Recipe

A country cannot become rich without the rule of law, limits on corruption, decent regulatory quality, and an effective government. History shows that voting and democracy are helpful but not required to achieve high levels of economic development. Hong Kong has never been a voting democracy, and Britain, Germany, Singapore, and most of the 24 advanced economies industrialized prior to complete democratization.

At GHP Investment Advisors, Inc., we strongly believe in international diversification, even into less‐developed countries. Naïve diversification, however, without quantifying and assessing each country’s governance or risks, seems foolish. China is a big country with large stock markets. As such, it occupies a large position on global indexes. From a governance perspective, however, it is merely in the middle of the global heap. Meanwhile, 30 years after the Berlin Wall came down, many of the former European Communist countries are leading candidates to join the club of rich nations. We believe a large and growing GDP per capita is a better indicator of potential investment opportunity than just a large GDP.